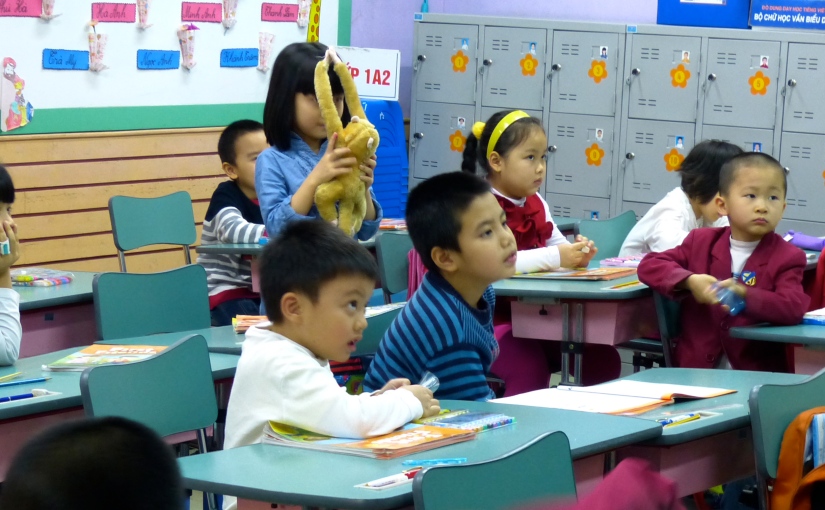 I’ve been back almost three weeks from my Global Volunteers experience in Hanoi. As with the last Global Volunteers project, I accumulated lots of wonderful memories–but this time, only a few photographs. This post is a bit random, but here goes.

All Global Volunteers follow this tradition:  We start each day with a “thought for the day”  and a journal reading summarizing the events of the previous day.  Volunteers take turns contributing thoughts and journal entries.

My thought, the motto of a Bangkok Wat, kicked off our two weeks of service in Hanoi.
“Enlarge your vision and be fascinated by the people surrounding you.”
The people surrounding me (volunteers, teachers and students) were indeed fascinating, and I benefited greatly from spending time with such interesting individuals.

We were the 21st Global Volunteers team to serve in Vietnam.  The first NGO to be welcomed into Vietnam, Global Volunteers started in the southern part of the country in 1993.  Initially the focus was on building schools, but it soon became apparent that what the people really desired was help learning English.

Jim, our very talented and extremely patient team leader,  reminded us that although teaching English is important, it is really a means to the ultimate goal of developing friendships.  We are all aware that our most important role is that of Goodwill Ambassador.  For some Vietnamese, we may be the first American they meet, so we will be supplementing the knowledge of the USA that they have gotten from TV.  (Yikes. That’s a big job!  But we were up to the task of taking on The Sopranos, the “Real Housewives” and Donald Trump! . )

The six of us volunteers had different backgrounds and different strengths, but we all shared a desire to make our time together a positive, fulfilling experience for students, teachers and ourselves.

On our first day, we attended the Monday morning assembly, where the students  welcomed us with a guitar rendition of jingle bells. 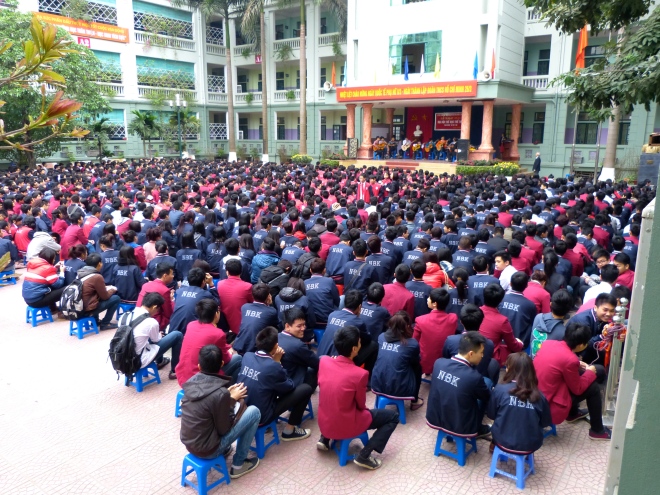 Judy, Sally and I worked with the English teachers in the primary school.

On our first day, Mrs. Vananh’s third grade class sang “We are the world” for us. For those of us that lived through the Vietnam War, it was quite an emotional experience, listening to these sweet, beautiful children and thinking that forty some odd years ago, we were dropping bombs on their city.
During our second week, we asked Mrs. Vananh if the children could sing it again, and when they did, I grabbed my iPhone and videoed them. Although I was sick the last two days of the project and missed seeing the kids watch the posting on You Tube, Sally and Judy reported that it was something to behold. The boys were high fiving each other, the girls were covering their faces, they were all pointing and laughing, enjoying viewing themselves on the classroom TV.

We weren’t just teachers–we were also students.  We were lucky to have the very patient Mai as our teacher.  She attempted to help us master the six different tones used in Vietnamese, with varying degrees of success.  (Bob was the star pupil–and I was his polar opposite).

Jeanne, Bob and Tom all worked with the intermediate and secondary students. We were all captivated by Zac, a very friendly and extremely articulate intermediate student. He is quite proficient with electronics, offering to protect my iPad with 4 levels of security. (I can barely remember ONE password–never mind FOUR!)

Zac’s grandfather taught him a lot about photography, so I let him play around with my camera. He decided to use the manual controls for this shot of me.

Zac was so impressed by my Vietnamese proficiency that he summoned one of his friends to hear me speak.  I’m sure their hysterical laughter at my pronunciation was their special way of saying “good job”.

Our time in Hanoi wasn’t ALL  work. One of the many high points of our time in Hanoi was an excursion to the Ethnology Museum with Lan and several of the student teachers. The museum was only a 15 minute walk from the school, but walking the streets of Hanoi is always an adventure. These beautiful young girls literally took us by the hand and walked on the outside to make sure that we were safe!  We must have been a sight–the seven of us big Americans parading down the street with our petite escorts protecting us from random motor scooters. 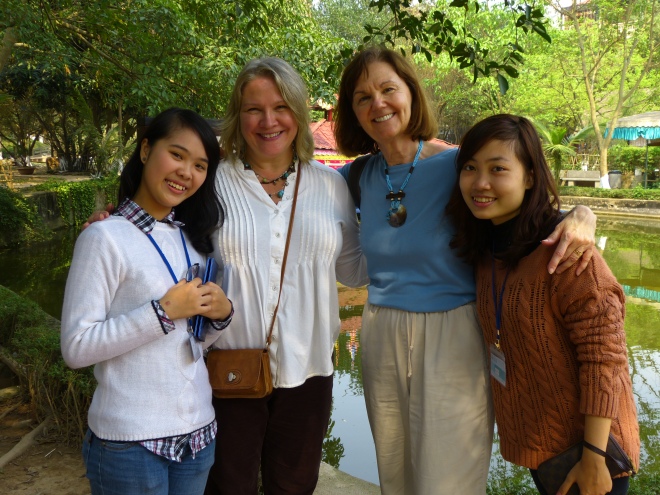 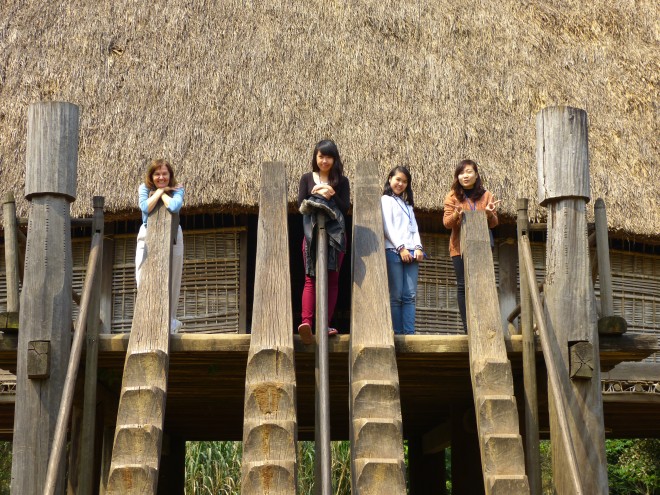 During our second week, we made it to West lake, the site of  John McCain’s crash. This monument is relatively new, and was probably put up to honor McCain for his role in normalizing US/Vietnamese relationships in the 1990’s. 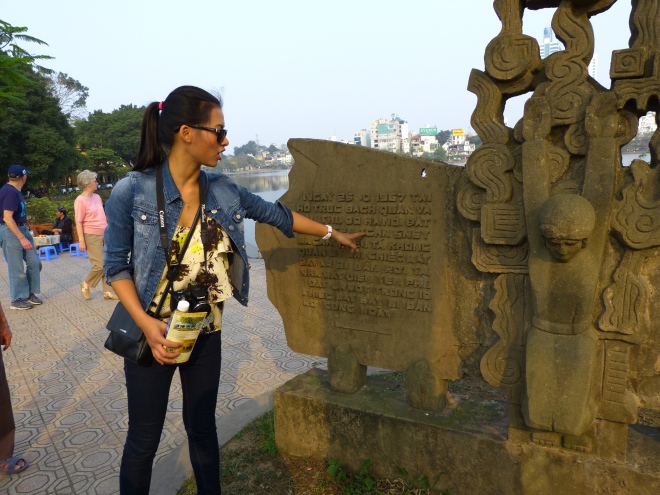 I had planned on taking lots of photos of the kids and teachers during the last two days of school, but although I was healthy through four countries and for almost 6 weeks, I spent those last days in bed…luckily recovering in time for the plane ride home.  My big disappointment was that I wasn’t able to say goodbye to the teachers and students, and have a farewell dinner with the team…so this post will have to function as my official thank you and ’till we meet again’ to all of the fascinating people that surrounded me.

10 thoughts on “Memories of Global Volunteers”