It was raining when I boarded the bus in Beja for the two and a half ride to Lisbon. The weather matched my mood–I was sad to leave all the new friends I’d made in Beja: the wonderful students I’d gotten to know during our two weeks together, the great “Team of Ten” Volunteers, our fantastic team leader. There were lots and lots of goodbye hugs.

Note to future visitors to Portugal–it costs only 14 Euros for a bus ride from Lisbon to Beja, on a super comfortable bus with free Wi-Fi. If you are visiting Lisbon, why not spend a night or two in Beja? Escape the traffic and crowds, enjoy the history, archaeology and cultural treasure of this intriguing Alentejo town.

Two cab rides and a flight later, I was in Madrid, reunited with my main man.

Here’s where we will be traveling over the next two weeks. First stop is Madrid. ( I lifted the map off the Grand Circle website. THEY are the ones that cut Madrid a little too closely.) The star is my feeble attempt to show the approximate location of Beja. You now have a rough idea of where this “don’t miss” town is located. Okay, so I would never be a successful map maker, but I give myself an A for effort.

The long, unusually dry period Portugal and Spain had been going through ended during our second week in Beja. The rain is expected to continue during most of our remaining trip. Oh well. They need the water, so the rain is a blessing. Or at least that’s what I keep telling myself.

We spent the morning of our first full day in Madrid on a bus tour around the city. First stop, the Egyptian temple of Denbod. No, this was not stolen during a military campaign. Had it not been moved, stone by stone, when the Aswan Dam was created, it would have been under water, just like the Temple of Dendur, in New York’s Metropolitan Museum.

Next stop– the royal palace, where we arrived just in time for the changing of the guard. 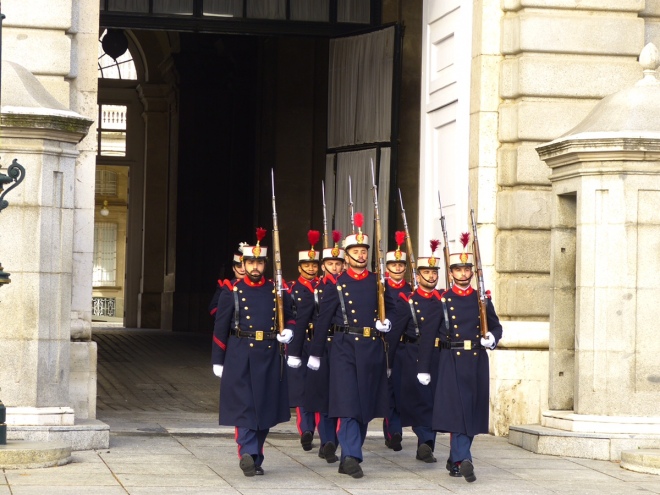 Juanjo, our guide, had warned us to be on the lookout for pick pockets. He explained they usually look like tourists, holding maps or cameras with one hand and reaching into your backpack with the other. Well, Linda, a member of our group, saw one doing just that, to a Chinese tourist. She was close enough to slap the pick pocket’s hand away.

A lot of good those guards were! A sharp eyed American woman with quick reflexes foiled the thief. Did I witness any of the excitement? No, I was my usual oblivious self.

Unfortunately, we didn’t have time to wander through any of the 2,800 rooms in this Versailles inspired palace. Instead, we decided to spend the afternoon in the Prado Museum, ogling the artwork by Goya, el Greco, Rubens and others.

My only regret: I wish I had researched the Prado more thoroughly, so I could have focused on certain pieces, and figured out the most efficient way to get to them. Talk about sensory overload! No photos were allowed inside the museum. I just have to be content with the images inside my head.

Although we could have spent our second day exploring more of Madrid, we chose the optional guided tour to El Escorial. This palace/ monastery/ school/ church was constructed by King Francis II, son of Charles V, one of the Holy Roman Emperors. The Escorial is shaped like a grill (yes, as in George Forman) to honor Spain’s own St. Lawrence. Why a grill, you ask? Well, that is how he met his end, by being roasted to death. (Yes, humans are strange and savage creatures) 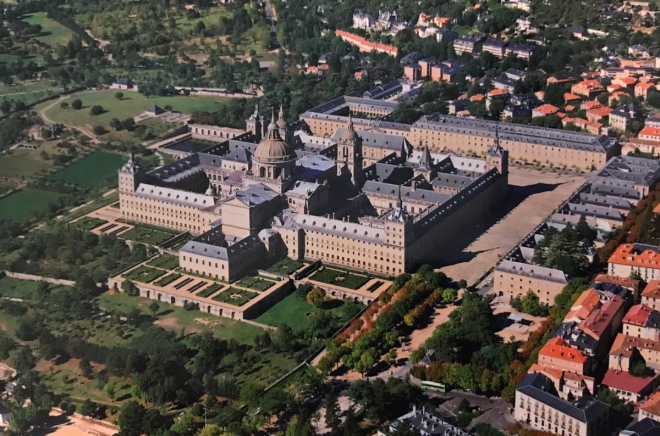 Philip II had the building designed  so that he could lay in his bed and see the altar in the cathedral.  All he had to do was open his bedroom door and he was in church. Because his bedroom was off to the side, the rest of the congregation couldn’t see HIM in his pajamas (or whatever Kings wore back then).

Philip’s chamber, including the bed he died in, and his chamber pot, were all part of the tour, in case you’re wondering, as is a huge painting of St. Lawrence on the griddle.

We also visited the Valley of the Fallen, a memorial to those who died during the Spanish Civil War. This was a truly impressive and very moving site.

The memorial consists of the largest cross in the world, under which a Basilica has been carved — out of the hillside.  It is hard to gauge the size of the memorial from this photo, but to give you an idea, the cross alone is 500 feet high.

The bones of around 40,000 people are buried In the basilica.  One more example of man’s inhumanity to man.

Time to move on, to Toledo and Granada, even though there was much more to see and do in the beautiful city of Madrid.