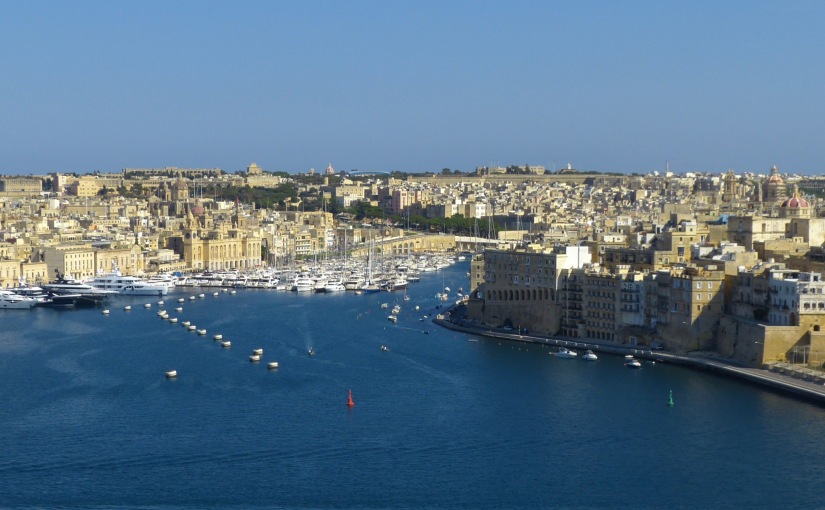 If you plan on vacationing in Italy, why not extend your visit a smidgen and hop over to Malta?  This amazing little country has an abundance of things to see and do, especially if you are interested in history and archaeology. We spent five days there in late May, and felt that our timing was perfect…perfect weather, not too crowded, reasonably priced.  Yep, there was a whole lot to like about Malta.

It is very easy to get to Malta from Italy.  Although we could have taken a ferry from Catania, we opted for the less expensive, faster way, via Air Malta.

The title of this post is “RANDOM Reasons” to visit Malta and that’s exactly what you are getting.  Not order of importance, or magnificence–just the order in which they popped into this lazy blogger’s head. 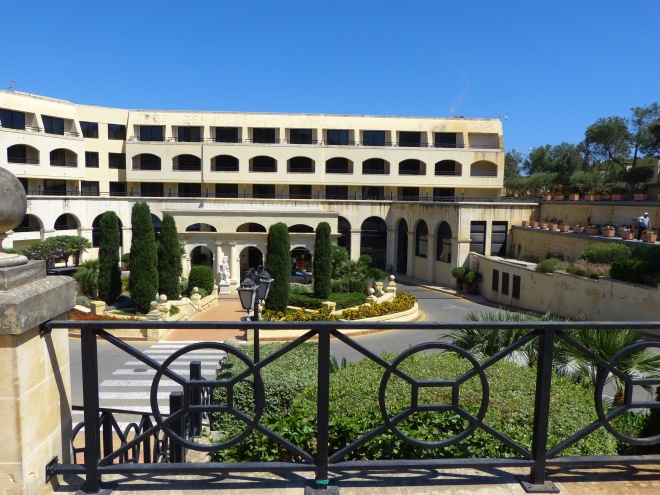 It’s beautiful, it’s just outside Valetta’s wall, it’s close to buses that can take you wherever you want to go, the service is great, the pool is fantastic, the views from the restaurant and bars are incredible, and it is relatively inexpensive (at least it was in May, with several months advance booking. )

Be forewarned, though. The hotel is located below street level.  88 steps below, to be exact. The steps aren’t steep, but you WILL get your exercise.  Which can be a good thing, if you eat as much as WE did. 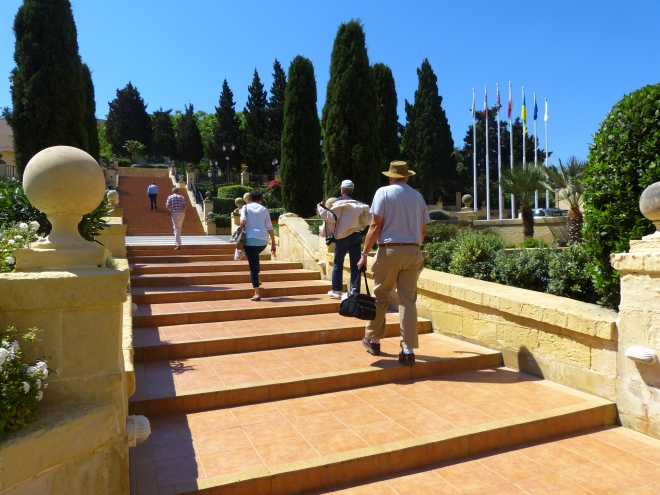 The hike up those stairs is so worth it, because where else can you find… 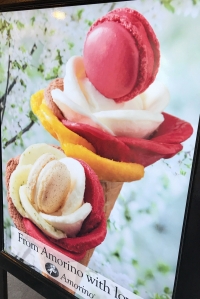 Although there is an abundance of gelaterias in Malta, Amorino was our favorite.  You can’t miss it–it is on Republic Street (the main street), on the right, if you are coming through the city gates. Your flower can have as many flavors as you want.

It doesn’t get much better than that!

And since we are on the subject of food, we discovered this wonderful restaurant close to the Blue Grotto. 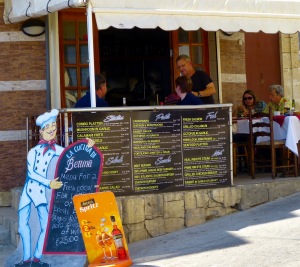 The owner of the restaurant was also our waiter. That’s him, in the black tee, explaining the menu to customers. 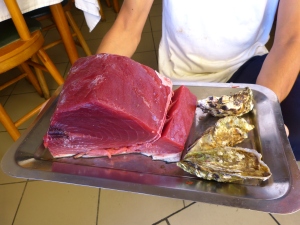 I’m ordinarily not a HUGE seafood fan, but this was incredible–the best tuna I have ever tasted!  Fresh?  Well, the owner told us our lunch had been swimming in the ocean just a few hours before.  Take a look.

No, that was not the serving size, but close.

We also had a wonderful antipasto platter, and a bottle of wine recommended by the owner/waiter.  I should have made a note of what we spent for this feast.  All I can remember was that it cost MUCH less than we ever expected!

I could go on and on about the Malta food, but I’m sure you get the idea.  It was delicious, varied and affordable. 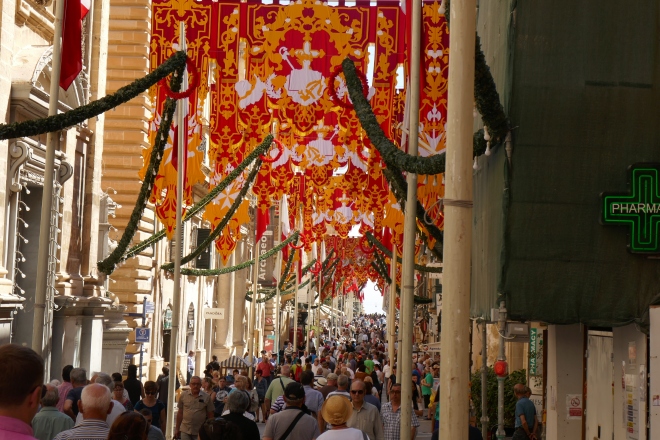 Yes, it does look a bit crowded, but if you want a more peaceful experience, all you need to do is duck down a side street.  Cruise ships dock in Valetta, so when multiple ships are in town, you do get throngs, but after 5, the city is yours.

The Grand Master’s Palace is on Republic Street, and there IS a guard changing ceremony every day. 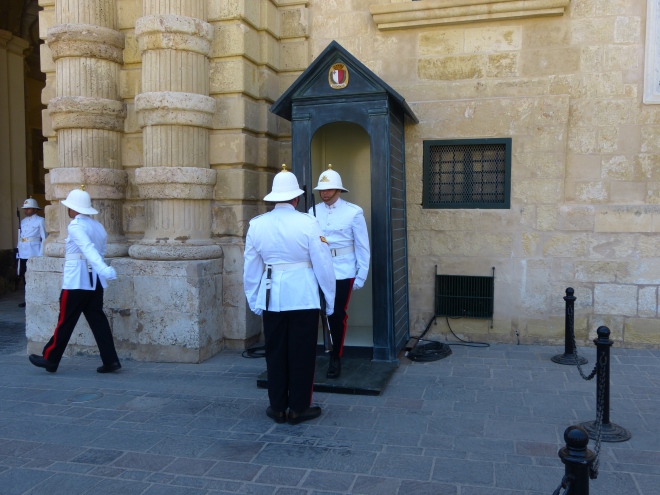 Other activities in Valetta definitely deserve their OWN number, like… 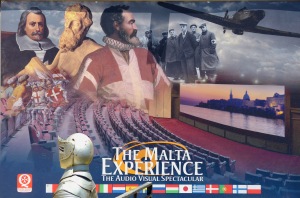 Perhaps you arrived in Malta without doing any research at all.  You know NOTHING about its history or the history of its many invaders.  Not to worry.  All you need to do is buy a ticket to The Malta Experience, then sit back and enjoy.  You will be quickly brought up to speed!  There are other options on the island, including one that promised you a 5D experience (moving seats, water spray, air blasts and leg ticklers) but this was the one we chose and we were not disappointed.  Now if we had been traveling with children, we probably would have opted for the multi-sensory extravaganza.

It is impossible to capture the majesty and magnificence of this building.  It doesn’t look like much on the outside.  In fact, we walked past it a couple of times without even noticing it.  But walk inside and WOW! 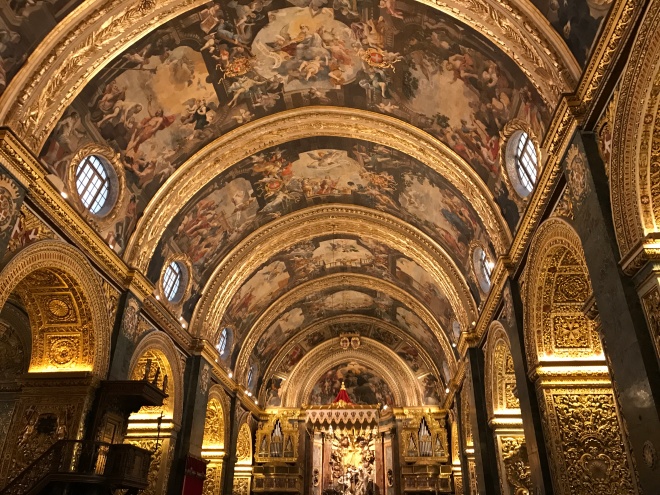 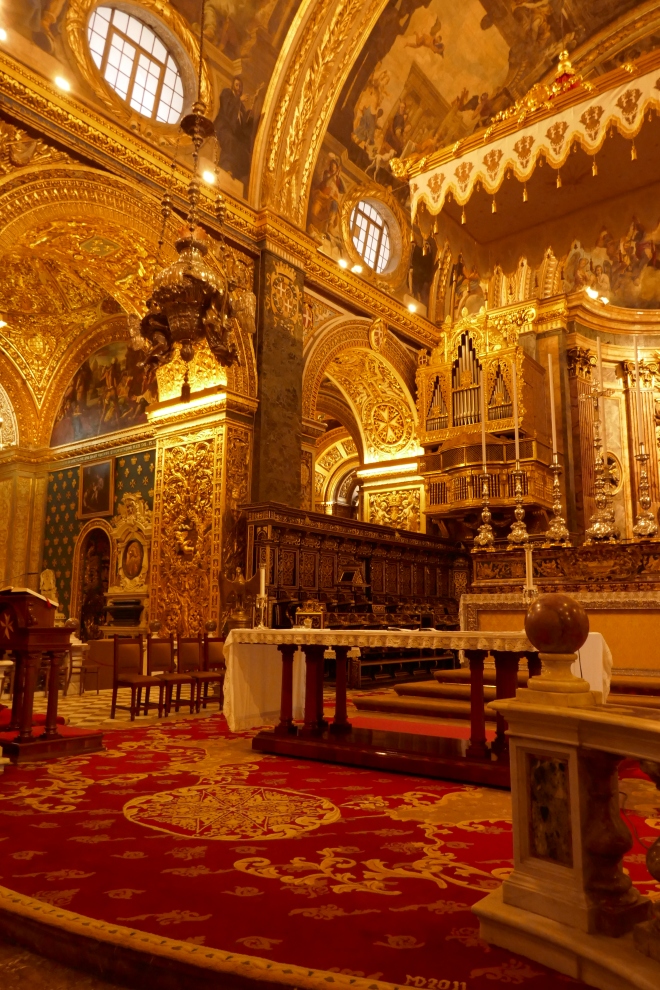 We’ve hit a lot of churches and cathedrals throughout Europe, and the Americas, but this has to be the most jaw-dropping one I have ever encountered.

“The Beheading of John the Baptist by Caravaggio is in the Co-Cathedral, but just off to the side.  I needed to ask directions to find it.

The painting is HUGE–it fills a wall.  You can’t get close to it, so I was unable to verify whether Caravaggio’s signature was formed by the blood flowing from the Baptist’s neck.  TIP: If you go, bring binoculars or opera glasses to get a better view.

You are not allowed to photograph the painting.  If caught, supposedly they confiscate your photo card. 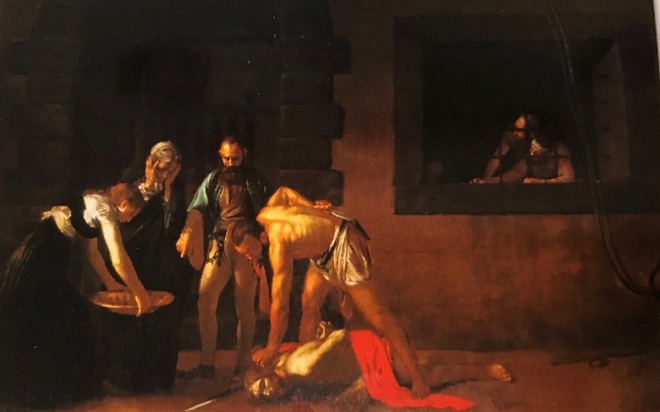 No, I did not break the rules.  This is a photo of a postcard, purchased from the gift shop.  A poor substitute, but better than nothing.

Here’s another tip: forget about the Hop On Hop Off buses here.  You are better served riding the regular city buses.  They are far less expensive, and more frequent.  Normally we are huge fans of HOHO, but this one had a host of negatives.  Its headsets were not reliable.  Some worked–some didn’t, and the information they provided was not that great.  There were long periods of silence, causing me to wonder whether the headset had stopped working.  I was frequently consulting the brochure to try to figure out where we were. 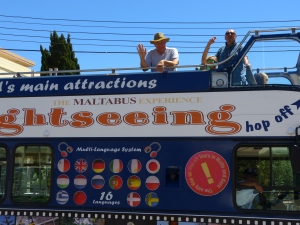 We soon discovered the HOHO doesn’t necessarily stop in front of attractions listed in their brochure.  But it DID stop at listed attractions that were closed.

We made the mistake of buying the two day, (red and blue) pass, so never tried out the city buses, but we sure saw a lot of them.  Next time, city bus will be our preferred mode of transportation.

If you DO decide to go the way of the HOHO, you can get aboard near the bus station close to the Grand Excelsior.

If you are into archaeology, you’ll love the Tarxien Temples.  Full disclosure.  We had wanted to see the Hypogeum, but that was completely booked.  And the Tarxien Temples were supposedly on the HOHO route, (not exactly,  as noted above, but we found our way), so why not?

These four temples date back to the Neolithic age (3600-2500 BC).  The Romans, 2000 years later, used the site for agriculture. The original structures were discovered In 1913, when  local farmers complained about the large blocks of stone they were striking while plowing. 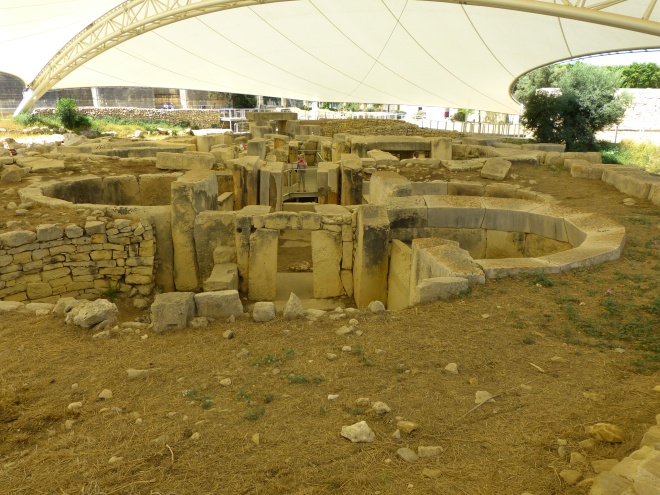 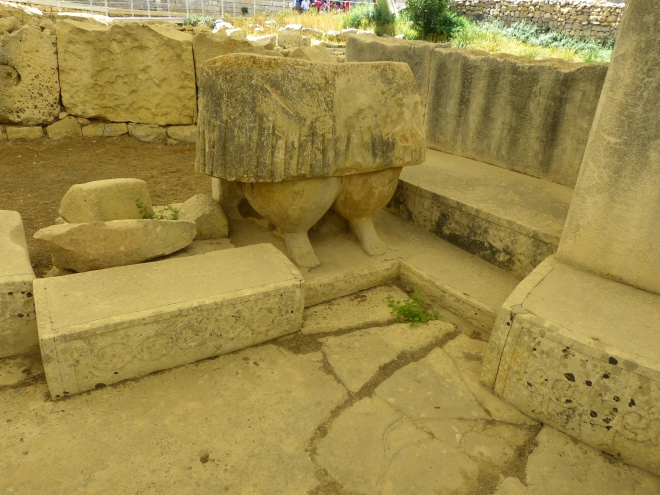 There are other ruins for those that are really, REALLY into prehistory, but this was enough for us.

We wanted to spend a day touring Gozo, and after our experience with HOHO, decided to book a private tour through the hotel.  We were not disappointed with our choice.  Marco picked us up at 8:30, drove us to and from the ferry and around Gozo, making sure we spent our time the way WE wanted.

We drove by Popeye’s village, now a tourist trap, formerly the set for Robin William’s 1980 movie, stopping just long enough to take a couple of photos. 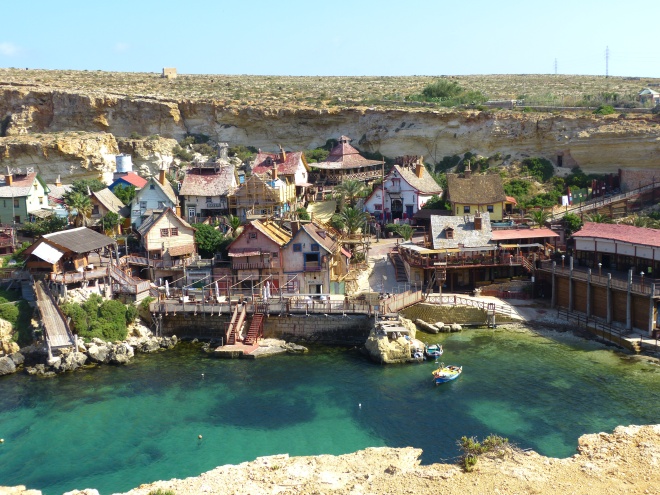 I remember suffering through the Iliad and the Odyssey during my Freshman year in college.  Maybe if I had known I’d be visiting the cave of the nymph who bewitched Odysseus, I would have enjoyed the books more.  (But probably not). The cave was closed because of “geological movement”, so we could only look at a hole in the ground, partially hidden by bushes, but the view of the nearby beach with its red sand was quite lovely. 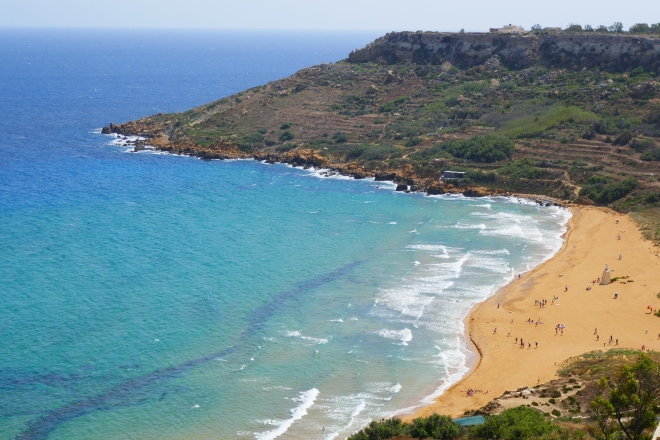 Gozo had lots of beautiful ocean vistas, a lovely cathedral, a great multimedia show in Rabat, (the old center also known as Victoria), fantastic food—AND this rather graphic painting of St. Agatha.  Seems the Roman suitor she rejected got a bit miffed and decided to cut her breasts off in retaliation. 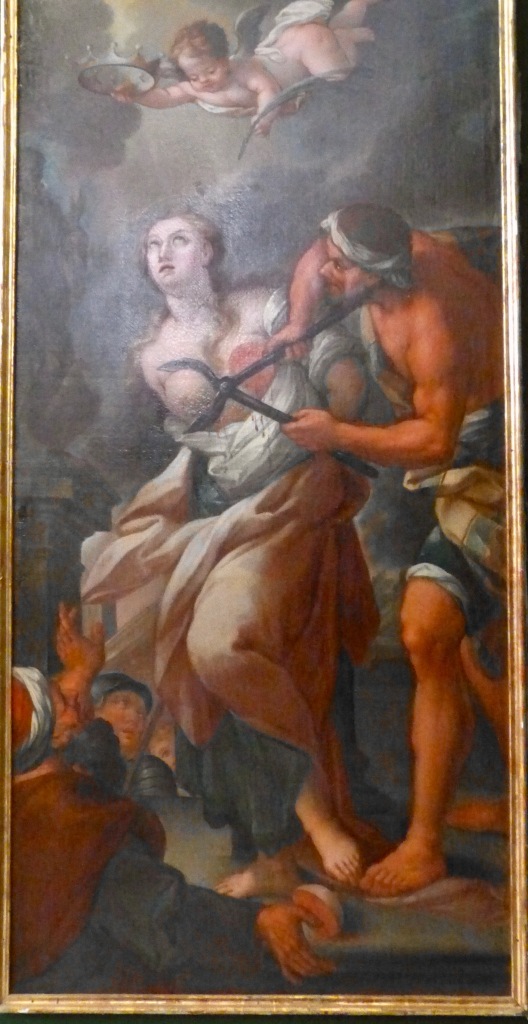 She looks remarkably unconcerned, maybe because the little angel hovering over her head (holding a crown) told her that in years to come, the Maltese and Sicilians would create a pastry in her honor.  Think I’m kidding?  Take a look.  They are called “Minni di Sant Aita”. Honest. 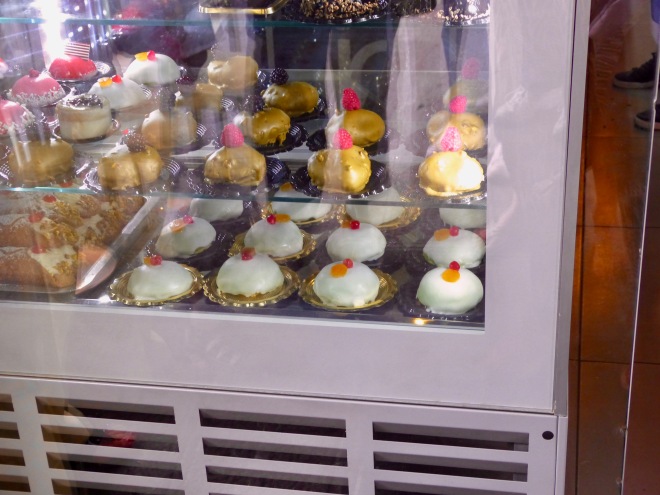 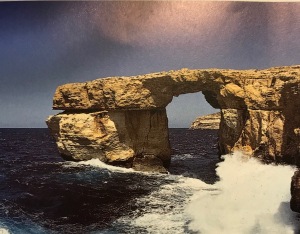 The Azure Window would definitely have made the list had we traveled to Gozo in 2016. Unfortunately for us, in March of 2017, the arch tumbled into the sea, so we had to content ourselves with this post card image, and a view of the site where it once stood.  Still a scenic  and lovely area, though. 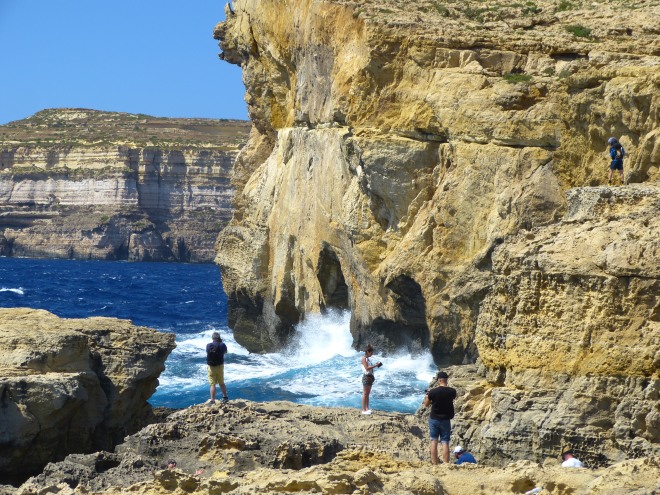 The oldest city on the island of Malta, Mdina was built and inhabited by Arabs until they were expelled by the Christians in 1250.   Another fortified city, it has the mandatory moat and gates. 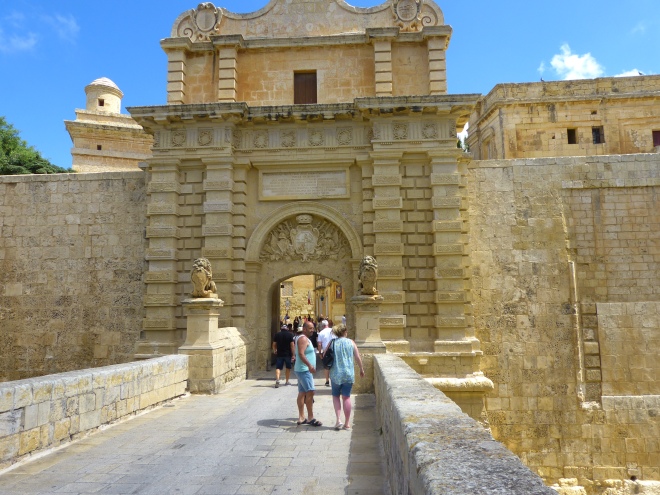 It also has the requisite cathedral, old buildings repurposed as cafes and gift shops, but MY favorite thing was the Palazzo Falzone, a 13th century building loaded with an incredible collection of antiques and the very coolest sound system ever. 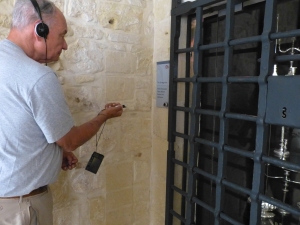 You just put on the headset, point the wand at a plaque on the wall and voila, you have a narrative about the article/ room you are viewing!

Olof Gollcher, a Swedish philanthropist and heir to a shipping fortune, purchased the building in 1927, and used it as a repository for his collections of art, silver, furniture, weapons and books. 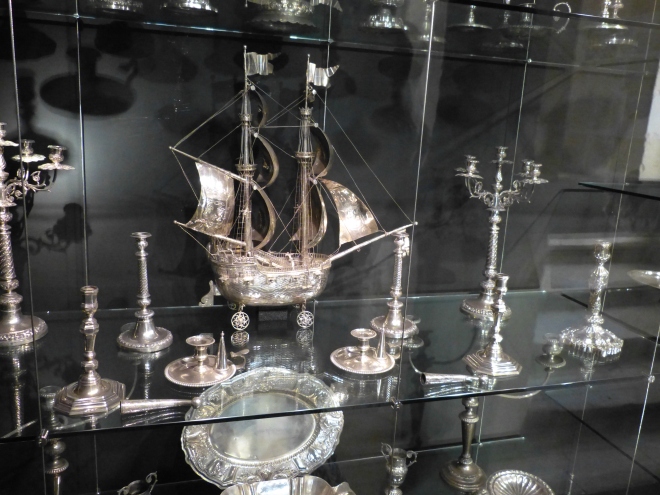 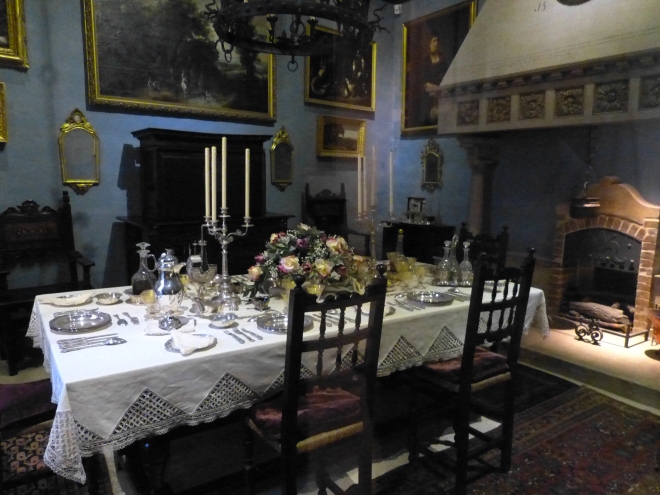 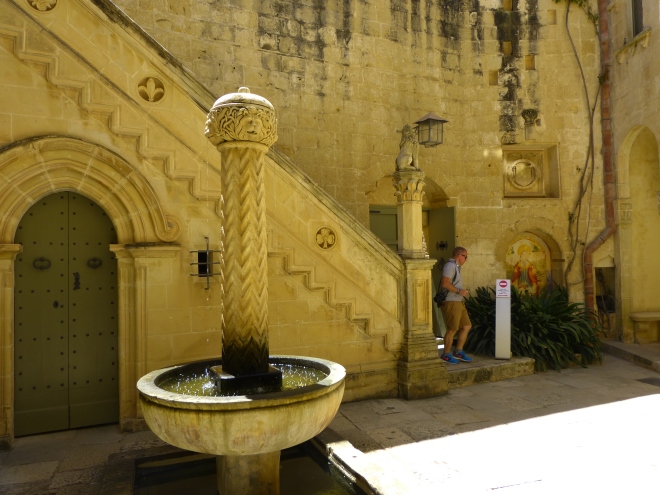 There you have it.  This lazy, random blogger got you started.  These ten highlights barely scratch the surface of all that is wonderful and glorious about Malta. The rest is up to you!