Imagine waking up to THIS spectacular scenery!  Ahhhh… 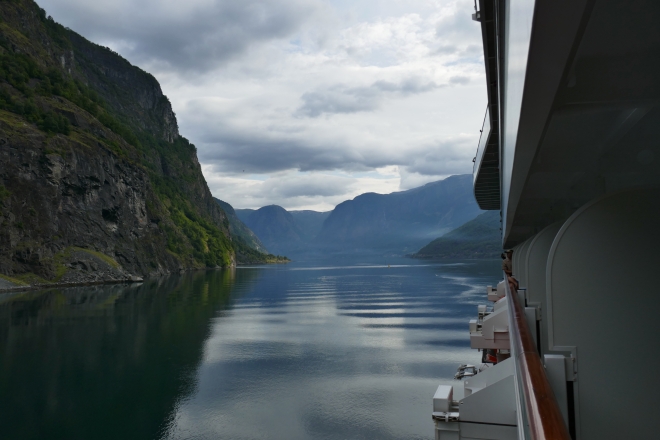 If you did, you would be just outside the little village of Flam.  It is peaceful, majestic, quiet and breathtakingly beautiful.

There isn’t much in the center of town–just a few shops and a train station, where you can buy tickets for one of the most scenic rides on this planet.

Viking offered a combined bike/train experience for $179 per person.  You take the train up the mountain and part way down, then get on a bike and glide the rest of the way into town.

I tried repeatedly to enroll us in that excursion, but the website consistently listed it as sold out.   Damn, I was deeply disappointed.  That disappointment lasted about 15 minutes.  Then I decided to do something about it, so I took to the internet.

Eventually, after much hunting and more than a few pokes around Trip Advisor and Cruise Critic, I discovered Cafe Rallaren.  Located in Myrdal, the last stop for the Flamsbana train, it not only supplies food (that’s the cafe part), but also offers bikes for rent.  You can ride the 12.5 miles down the mountain, then leave the bike in town.   No need to lock the bike, you just leave it there.  In town.  What a concept. Try THAT in Boston or San Francisco!

We chose the 11:05 departure, which gave us time to enjoy a leisurely breakfast on the ship, and wander through the town. We would arrive in Myrdal at noon, just in time for lunch at the cafe.  We were the only ship in port that morning, so Flam wasn’t crowded at all.  That was about to change.

When our train pulled into Flam, literally thousands  of tourists came rushing off–perhaps heading for the bathrooms?  To get a window seat on one of the tour buses in the parking lot?  Who knows?  It was a Chinese tour group, so we weren’t able to ask anyone why they were in such a hurry or where they were coming from.

The good news is OUR ride up the mountain wasn’t crowded at all, and we all had our choice of seats.

The train makes a stop at a waterfall,  so the obligatory photos can be taken.  That spray was COLD and powerful, so after about 10 seconds spent admiring the falls’ grandeur (and getting damp), I quickly reboarded the train to photograph the waterworks from the doorway.   I know.  I’m a wimp.  I just hate discomfort of any kind.  Especially when it is self inflicted.

What I didn’t see, but Mike (who is made of much stronger stuff) did, was the water nymph who appeared alongside the falls, waving her arms to the tourists. He took the next two photos.

Can you spot her? 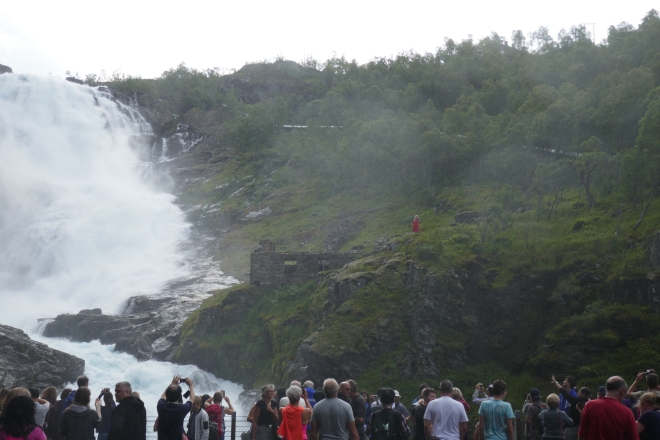 Getting our bikes and helmet at the cafe was easy and uneventful.  Not so for the rest of the trip.  So how was it?  It was incredibly beautiful. 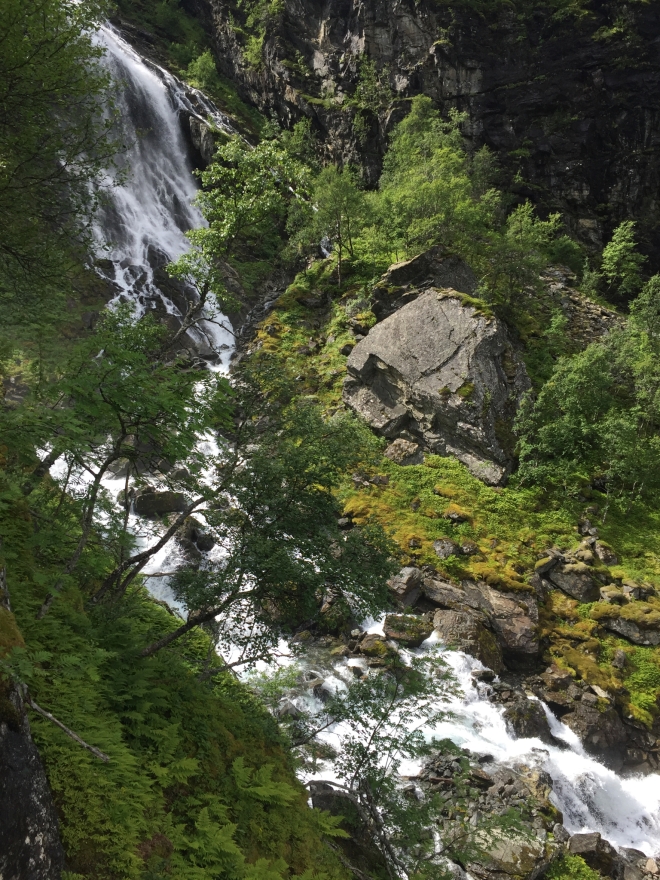 It was incredibly steep, and rather rocky, for the first mile,

Best strategy?  Walk your bike down the steep sections of that first mile.   Unfortunately, Mike didn’t, and took a bad spill.  He injured himself enough to made him uncomfortable for the rest of the cruise.  To make matters worse, shortly thereafter, his bike got a flat tire.  He soldiered on, NOW walking the bike.  What else could he do?  You don’t see any cell towers in these photos, do you?  No houses or cars either.  Put it all together and you end up with no bloody way to get help.   It was bad, but it would have undoubtedly have been far worse if the drama queen member of our duo had gone down.  (That would be me.  Mike, on the other hand, never complains…)

Eventually we reached a more inhabited area, where both Mike and the bike were rescued and given a ride back to the ship.

The ship sponsored bike trip started at the flatter, paved section, about half way down the mountain.  That’s something to keep in mind for the less adventurous.  Unfortunately, I can’t give future Flam visitors any information on how THEY could get in touch with that particular bike vendor.   I just spotted a trailer by the side of the road, with lots of bikes loaded onto it, but no signs or identifying information.

Of course, if you decide to do it on your own from the top of the mountain, you DO have the option of walking your bike down and around the hairpin curves.  That worked quite well for other bikers (such as me).

I was in a bit of a hurry to get back to the ship to make sure my guy was doing okay, so I didn’t take many more photos.

In the US, we have speed bumps.  Here in Flam, they have speed goats.

This guy either took a shine to me, or thought I was the “other” character in the fairy tale.  All I know is he was repeatedly butting against my leg and followed me a while! 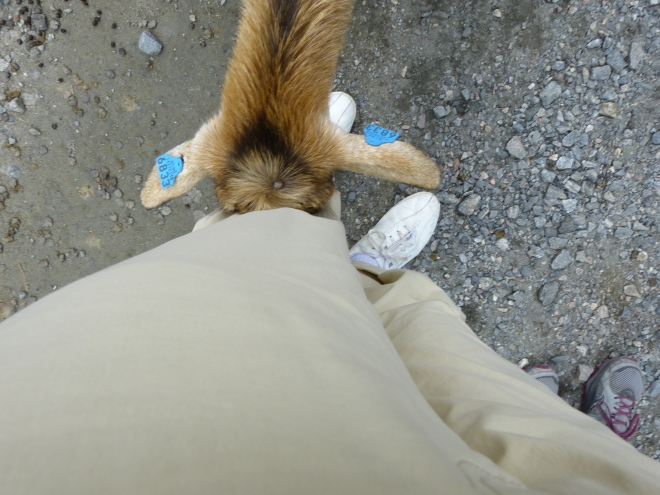 Yes, there was a happy ending.  Mike visited the ship’s doctor, who after determining that nothing was broken, sent him on his way with some happy pills.