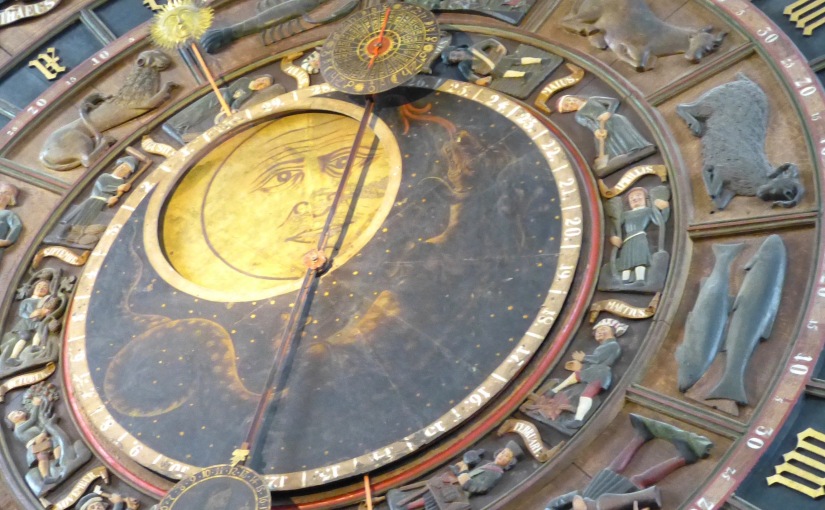 Berlin showed up on our Viking itinerary as one of the ports of call.  Geography never was my strong suit, but even I knew that Berlin has no oceanfront property.   Although Viking arranged free transportation by train to Berlin, we decided that we didn’t want to spend approximately 6 hours traveling back and forth.  Besides, we will probably never get back to Rostock and Warnemunde, but a few days in Berlin may indeed be in our future.

We did not regret our decision.  Our day started with a German breakfast of pretzels and “liquid gold”, the German invention we Americans call beer.

Next stop was the lovely little town of Rostock,  formerly part of  East Germany.  Enrico told us that on November 9, 1989, the citizens of Rostock danced on the wall in celebration of the peaceful revolution.  Germans commemorate October 3rd, 1990 as their reunification date, with a festival at the Brandenburg Gate.

We didn’t see the Brandenburg Gate on THIS trip, but we DID see Rostock’s Stone Gate. 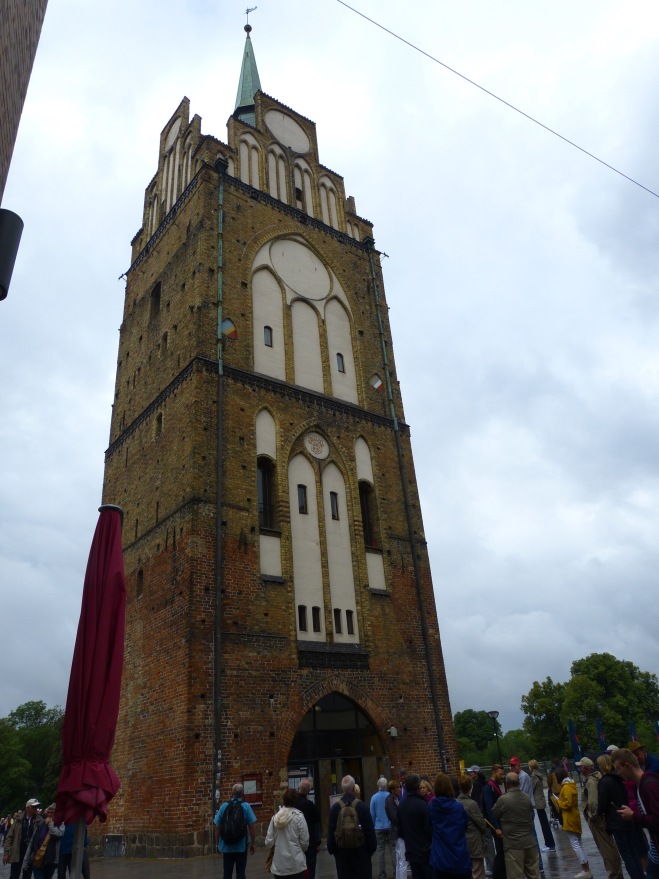 Enrico pointed out that there are no pigeons hanging out in this particular tower.  The reason?  The bricks were drenched with bulls’ blood.  Why that makes a difference, I don’t know.  I also don’t know whether cow’s blood–or any other animal’s blood would also do the trick.  After my beer breakfast, my mind wasn’t sharp enough to ask such insightful questions.

Other highlights of Rostock were its public University 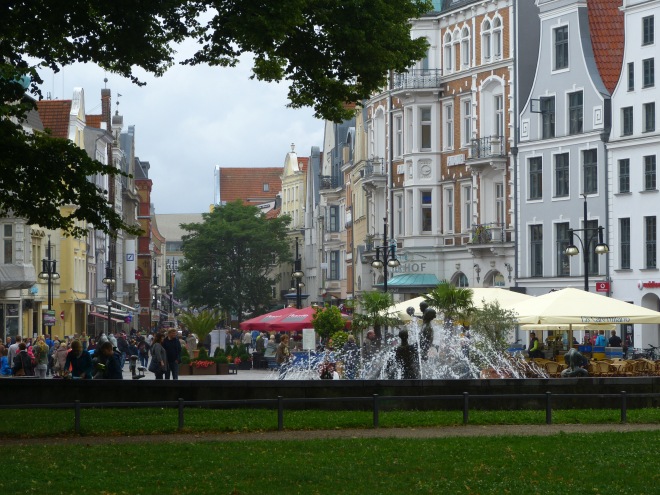 The Germans, like many Europeans, have a more open attitude about bodies and sexuality, as demonstrated by this bench in the fountain. (Yes indeed, it was IN the fountain) 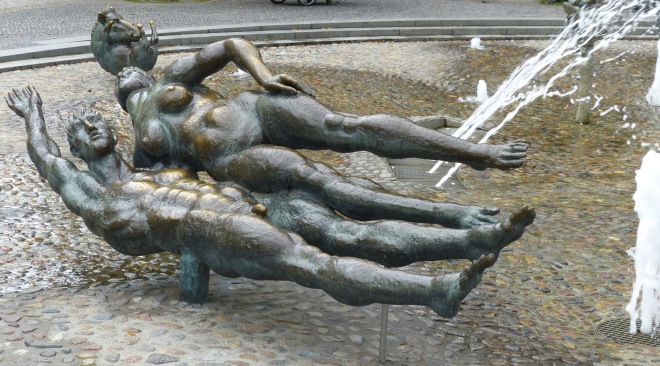 What better way to follow up our time by the fountain than with a visit to St. Mary’s Church?   Construction of this church initially took place in the 13th century, with renovations and restorations repairing subsequent damage that war and religious differences wreaked.

We were fortunate to have a guide who is getting his degree in education.  And what a wonderful teacher he will be.  He shared information about German culture and society.  Food in German is inexpensive, education is free and health care is free.  The state pays 185 Euros per child per month to parents.  All this is funded by a 35% income tax, with additional funding from taxes generated by exports.

One of the advantages of travel is learning how different societies address their problems.  Enrico’s thesis is on what he termed America’s fascination with guns.  As a contrast, he explained that 95% of the German police never fire their guns during their entire career.  When they do, they aim for the culprit’s leg.

Our return to Warnemunde was via a ferry.  Although the weather wasn’t the best, we wandered around this little seaside town, enjoying the sights.

The best part of our decision to stay local was we had the rest of the afternoon to enjoy the beautiful Viking ship.   We were welcomed back with open arms, and with glasses of champagne.

Another bonus?  It was easy to get a reservation at The Chef’s Table, our favorite specialty restaurant.

Okay, just ONE food photo.  This first of five courses, beef carpaccio, gives you an idea of the artistry of the Chef’s Table’s offerings.  And yes, that red goblet by the plate is indeed a paired wine. 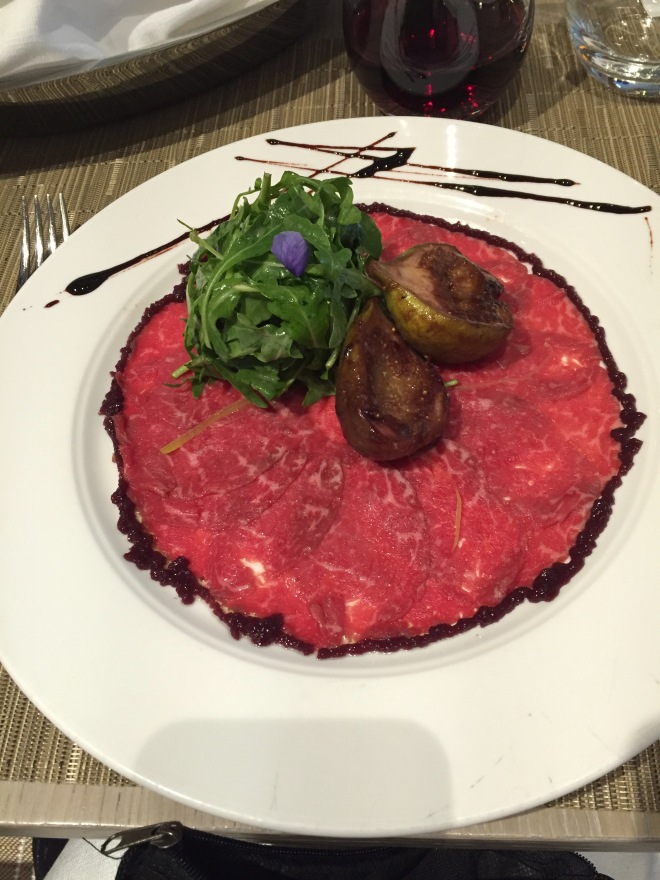 Because we weren’t exhausted from a long trip to Berlin, we had enough energy to visit  Torshaven, Viking’s cozy little nightclub.   Here’s the band belting out some Gloria Estevan songs that they learned at the request of our friend, Jeanne. 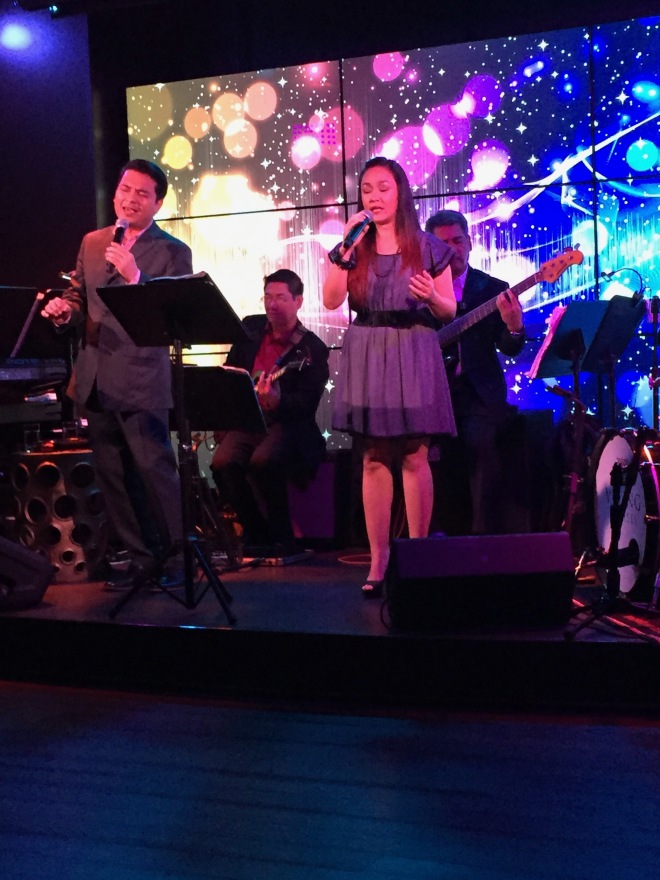 10 thoughts on “Berlin or Rostock and Warnemunde?”