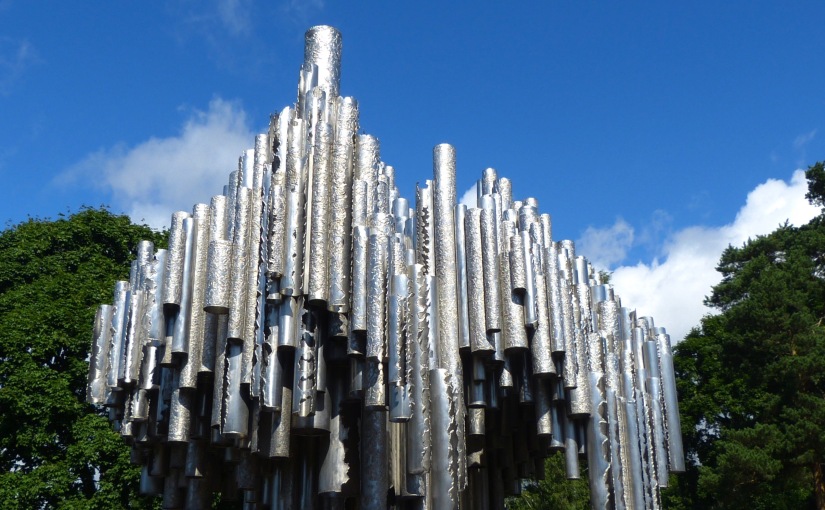 Usually my blog functions as a substitute for postcards.  It is a way to stay connected with family and friends–a way for them to share in the wonder and excitement of travel without enduring the long plane rides, jet lag, and other miscellaneous discomforts of life on the road.

For this cruise, however, the free wifi was not robust enough to allow photo uploads.  Being a very visual person, I saw no point in posting without photos.  So, now that I’m   home, I’m playing catch up.  These postcards were way delayed!  But maybe my posts will be helpful to anyone that is considering the Viking Homelands cruise, or might be touring any of the Baltic ports we visited.

Helsinki was the perfect respite between the two sensory overload ports of Stockholm and St. Petersburg.  We took the included Viking tour, which was a morning bus trip with three stops.  And that was enough for us.

First stop was the Sibelius monument, which consists of 600 welded stainless steel tubes,

and a bust of the composer.

The guide told us that Sibelius’s bust had seven wrinkles–one for each of his symphonies.  I wasn’t able to verify, but I’m not so sure I like that way of displaying accomplishments.  If that were the universal yardstick,  I’m either way behind  with achievements or way ahead with wrinkles.

Our guide told us that when Sibelius died in 1957, at the age of 91, the US Embassy was the only one to have a moment of silence in his honor.  Nicely done, USA.

Next up, the Rock Church, which is not its real name, but its real name is long, hard to spell, and not as descriptive.  So here’s the story:  two brothers got the bright idea to hollow out an enormous hunk of granite, turning it into, of all things, a church.  Lo and behold, their idea was the competition winner.   After four years of applications, permits and paperwork, plus one year of construction, the church was completed.  And here you have it.

Our final stop was at Senate Square, where Russian Tsar Alexander ll stands, with the Finnish constitution in his hand and a bird atop his head (Just so you know, the bird is not a permanent part of the statue).   He was quite beloved in Finland, much more so than in Russia, where he was assassinated after freeing the slaves, providing an example of  common ground between Russia and the USA. 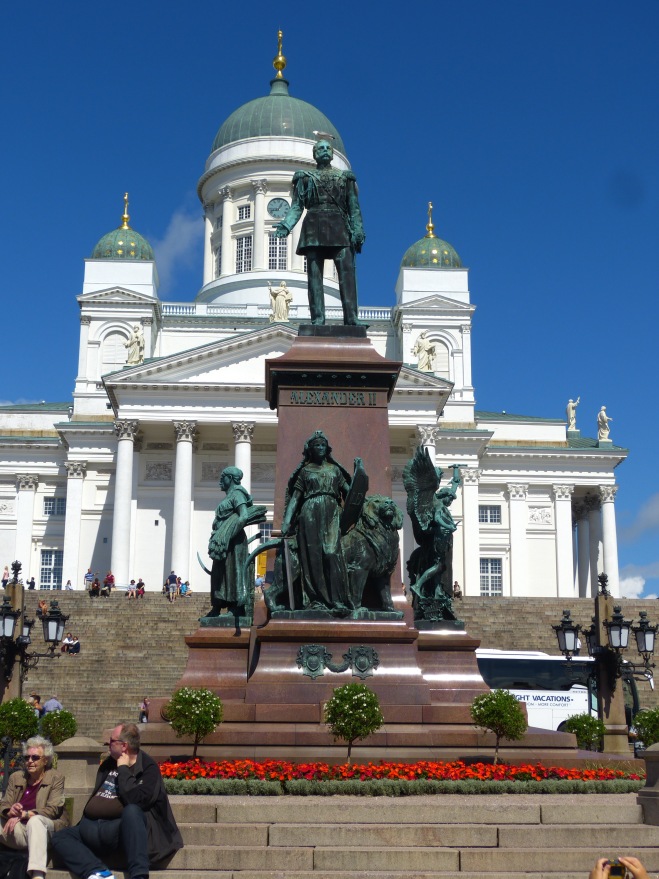 Behind him is the Lutheran Church, which we opted not to visit.  Did you see all those steps?   Instead, we stopped inside the tourist information center, where we discovered this promotional brochure from a Finnish company.

Okay, I’ll admit it.  I was completely taken in by this brochure, and thought that
1. the company was real, and  2.  that it had an amazing sense of humor. 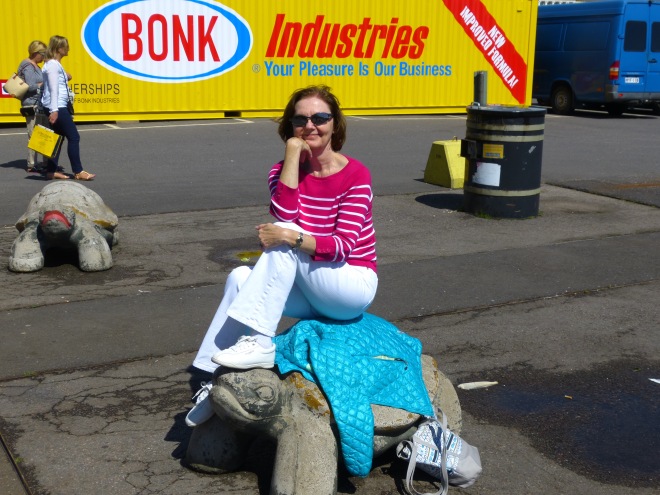 Being a curious soul and having access to the internet, I decided to check this company out and discovered that it is actually fictional — the work of Finnish painter and sculptor Alvar Gullichsen.   I wish I’d known that when we were in Helsinki.  I would have explored that yellow building in the background, rather than posing for a color coordinated photo.