My last post about Tibet was a bit of a downer, wasn’t it?  As my friend Sally reminded me, “not every place is lovable”, but as with all travel, there are always positive elements, whether it be a greater understanding of a particular culture or country, or an increase in self knowledge.

We not only saw the exterior of the iconic Potala Palace, we were also able to climb to the top and visit some of the interior on our way up.  Built by the fifth Dalai Lama in the late 1600’s on the site of Songzen Gampo’s palace, it became the winter residence of successive Dalai Lamas.  Photographs are not allowed of any of the interior rooms, but they were so dark, smoky and gloomy, it would have been difficult to get a good shot anyway.

The palace, 13 stories high, offers a great view of the city of Lhasa.

Here’s a different view, showing the  modern city the Chinese have built around the Potala.

It was so hard to imagine a small child being taken from his family and brought to live in this massive place, surrounded by monks who were charged with his instruction.   The current Dalai Lama was two years old when he was identified.  He spent two years in a monastery near his family’s home in Amdo, then moved to the Potala two years later.

The summer palace, the Norbulingkha (Treasure Park) has a very different feel to it.  This was built in the mid 18th century by the 7th Dalai Lama.  It is actually quite close to the winter palace. The largest horticultural park in Tibet,  it includes a private zoo, which wasn’t open when I visited.  At one time it housed an elephant that was a gift from the Maharaja of Nepal. 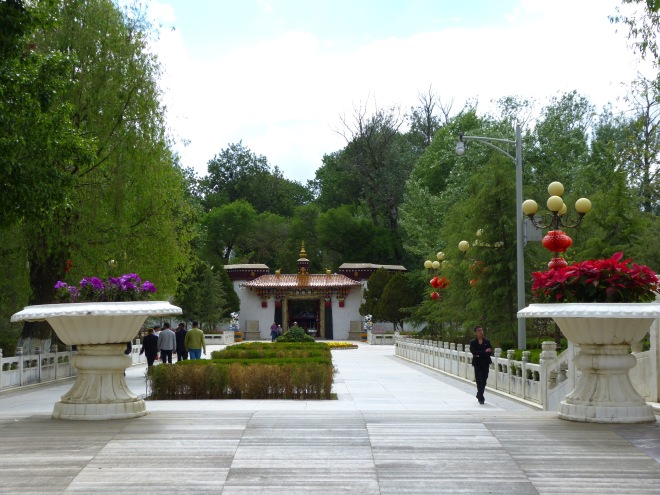 Heinrich Harrer conducted lessons with the 14th (current) Dalai Lama in the summer palace.  It was from this site that the Dalai Lama departed in 1959 to escape from the Chinese.  Another fun fact:  According to Harrer in his book “Seven Years in Tibet”, women were not allowed in the Norbulingkha because it was believed that they would have defiled the gardens.

Two famous monasteries in Lhasa are located near the palaces.  The Drepung monastery was being repaired, so we only visited the Sera Monastery.  I was disappointed because I had learned in my pre trip reading that Tibet’s creation story was told in murals at the entrance of the Drepung Monastery, and I had hoped to see it.

What we DID see were the Sera monks interacting in an outdoor courtyard.  That yellow hats on their shoulders?  It made me smile–all I could think of was Woodstock, Snoopy’s little friend.

The detail on the exterior of the buildings was exquisite, however it was nothing compared to the tombs of the Dalai Lamas inside the Potala.  Those looked like wedding cakes–5 to 7 tiers high, covered with carvings and encrusted with jewels and precious stones. 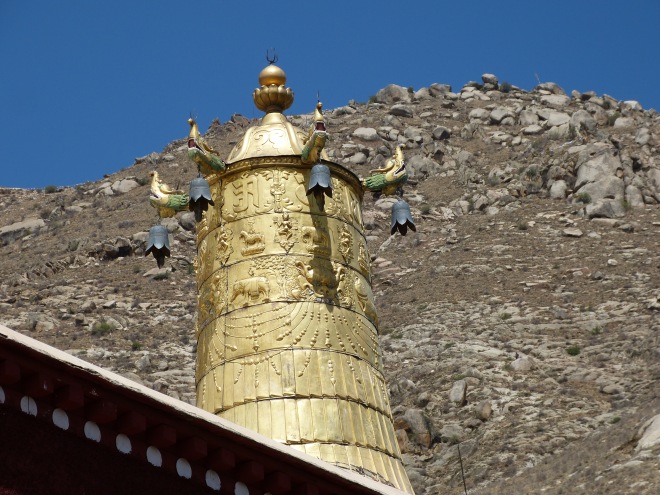 We arrived in Lhasa on 5/14, which was the start of a 15 day “festival” celebrating Buddha’s birthday.  For Tibetans, a festival consisted of either walking around a sacred site, or prostrating themselves as they slowly made their way counterclockwise, praying as they went.

Leaving Lhasa, we traveled to Gyantse, where we visited the Palcho Monastery. 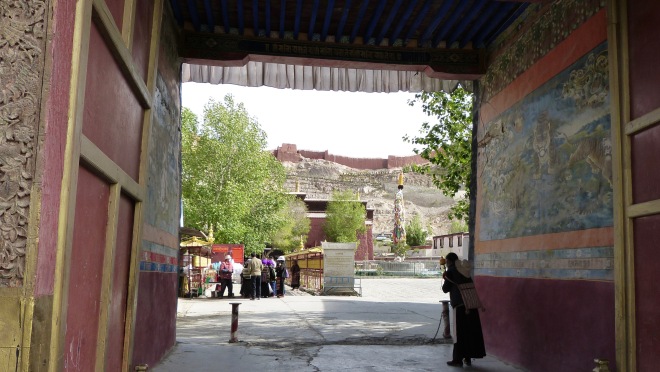 Here, you were allowed to take photos, as long as you paid a fee.  In the distance, you can see the red fort that dominates the landscape.

This monastery was built in the 1400’s; its interior looks very much like the interiors of the other monasteries, small chapels, very dark and smoky.  I used a flash and the highest ISO possible to get these photos.

The other special feature of the Palcho monastery is the Kumbum Podang.  (Don’t you love the name?)  A Kumbum is a stupa that is also a  three-dimensional mandala. The first five floors of this structure are square and the remaining four are circular.

Unfortunately, this building was also being repaired so we were unable to go inside, but according to Wikipedia, it has 76 chapels and shrines and is also known as the Ten Thousand Buddha Pagodas.  Why?  Because it contains ten thousand images and murals of Buddhas. 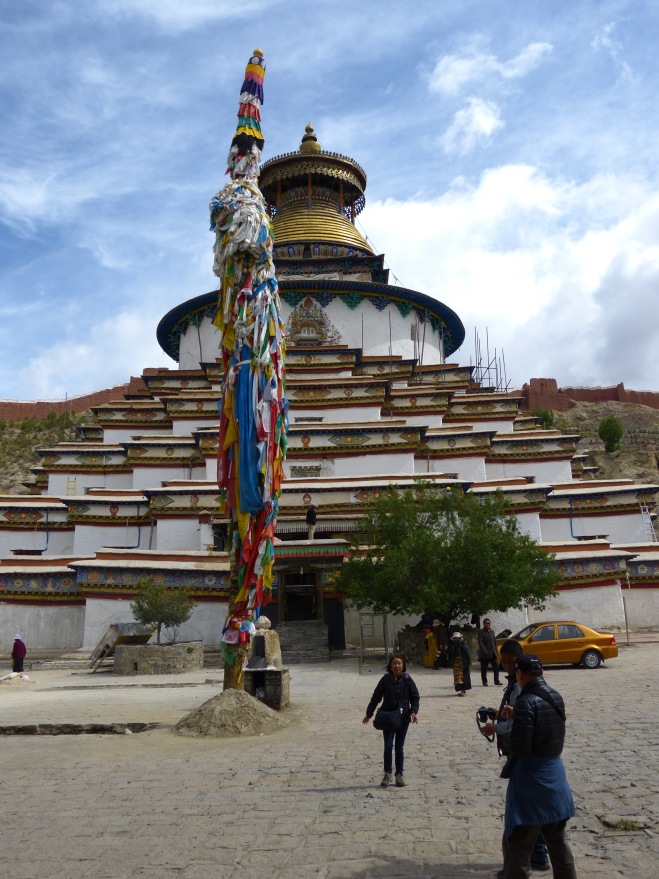 Gyantse is also notable because in 1904, the town and monastery were attacked by the British, led by Francis Younghusband.  The Tibetans were armed with outdated weapons, but they had been assured by their religious leaders that their victory was preordained.  In addition to their weapons,  they were protected by talismans that they thought would repel bullets.  They were mowed down, and the buildings were shelled.

In 1959, the Chinese attacked the complex and it was also damaged during the cultural revolution.

After one night in Gyantse, we traveled to Shigatse, Tibet’s second largest city and the location of the Tashilhunpo Monastery.  This monastery has been the home of the Pachen Lama, the great scholar, and is where most of the prior Pachen Lamas are entombed.

This photo was taken in Gyantse–no interior photos were allowed in Tashilhunpo.  The top photo is of the 10th Pachen Lama and the bottom is of the current (11th) as a child.

The 10th Pachen Lama was taken to China as a child to be educated.  Although he initially supported the Chinese incursion into Tibet, after returning home and seeing the impact on his country, he began to speak out.  This resulted in his being tortured and imprisoned in China for 16 years.  After his release, he married a Han woman, had a child and returned to Tibet.  He died suddenly in 1989, at the age of 51 shortly after giving a speech critical of the Chinese government.  His resting place is an amazingly beautiful tomb, with gold carvings and jewels, similar to that of Dalai Lamas in the Potala.

There was considerable controversy over the selection of the 11th Pachen Lama.  The Dalai Lama’s choice disappeared after being named and the Pachen Lama chosen by the Chinese, now in his 20’s, is still being educated in China.

Because we were in Shigatse for two days, we were able to wander through the city on our own.  Marilynn, my energetic buddy, and I climbed to the Shigatse fort that overlooked the city.

For some reason, the ride back seemed far more pleasant than the ride to the two cities.  Perhaps it was because we traveled  back along the river or maybe it was because  we knew what to expect for toilet facilities?

After Shigatse, it was back to Lhasa for our return to our gorgeous hotel in Nepal, the Gokarna Forest Resort.  Great food, margaritas, beautiful surroundings, greeted by our wonderful Nepali guide Binoy– we were SO very glad to be back in Kathmandu!