Colin Fletcher called the Grand Canyon a “huge natural museum of the earth’s history”. Okay, so I didn’t know who Colin Fletcher was either, until I signed us up for this Road Scholar trip. Now that I am a retiree (excuse me, “lifestyle manager”), I have time to actually READ the suggested background materials.

Colin Fletcher wrote “The Man who Walked Through Time: The Story of the First Trip Afoot Through The Grand Canyon”. Given that the canyon was inhabited by Native Americans for about 10,000 years before the first Europeans arrived, it isn’t hard to imagine that one or two of them might have sauntered from one end of the canyon to the other before he did, but then again, THEY never published their adventures and thoughts. I shouldn’t be too hard on Mr. Fletcher, though. After all, his book was written in the early 1900’s; half a century later, when I was in school, we still were being taught that Columbus “discovered” America, as if it were completely devoid of human inhabitants when he arrived.

So, now that I’ve gotten beyond the title, what did I learn from his book? Other than that I would never, ever even CONSIDER hiking through the canyon, I learned that you can tell the age of the rocks from their colors. I created this little chart so I’d know what I was looking at when we get there, starting from the rim and moving on down to the bottom:

Okay, so I have no concept of what 400 feet (or any of the other number of feet, for that matter) looks like–but when I get there, and take photos, and post them, well, then we’ll ALL know. And we’ll also know how long those bloody rocks have been plopped there.

I do better with visuals. So here’s a picture of where we will be for the week, starting and ending in Phoenix. 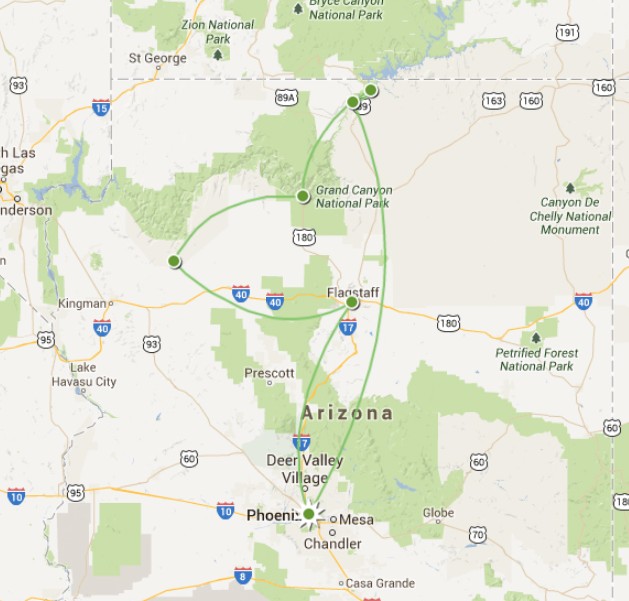 This trip will have an added element of adventure. The original plan was that this trip would be my father’s day present to my dad. He and Mike were going to room together, and I would be rooming with my “childhood” friend, Augusta. My dad’s knee became uncooperative, causing him to have to cancel out. Well, I notified Road Scholar and told them to change my roommate to Mike. I then learned that doing so would mean that Augusta might be assigned a female roommate, which wasn’t quite what she’d had in mind. So, Mike being an all around wonderful guy, decided to ‘take one for the team’ and agreed he’d be the solo traveler. No, that doesn’t mean HE gets the female roommate. He will only be matched up if there is another solo male traveler. The adventure part? We won’t know how this will shake out till we arrive tomorrow night.

Just think of the possibilities… Mike’s assigned roommate is a Sean Connery look alike, who gazes upon the lovely Augusta and is immediately smitten, causing us to swap roommates faster than your average college freshman. Beautiful sunsets, the canyon as a backdrop..could this be a made for TV movie, or what? Lifetime channel, perhaps?

More likely, Mike will be roommate-less. Hmmm. Maybe we shouldn’t mention that we’ve been married for 37 years. That way, if I am spotted doing the “walk of shame” out of his room some morning, it might liven up breakfast discussions.

So, which part of the blog did YOU find more interesting– rock colors and ages or the possibility of “seniors gone wild”?

7 thoughts on “Off to The Grand Canyon”