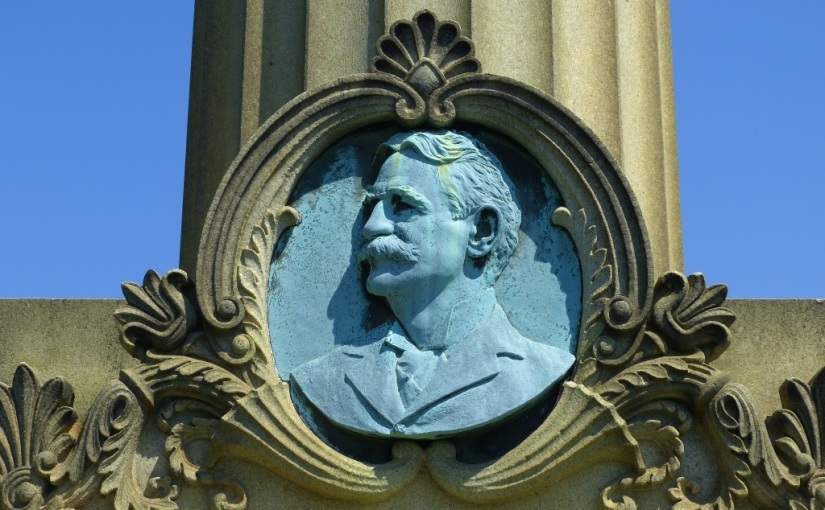 Every town should have its very own super hero. Henry Huttleston Rogers was Fairhaven’s.  If you’ve never heard of him, that’s an indication that you don’t live in Fairhaven  and you probably took I-195 from Providence to Cape Cod, instead of the more scenic Route 6. Sure, I-195 will get you to the beach faster, but what you miss is a chance to see the impact one of Standard Oil’s “robber barons” can have on a sweet little town.

After you clear the bridge from New Bedford, the highway’s name changes to Huttleston Avenue, and if you look to your left, you’ll see one of the many reasons the town has chosen to honor its home town hero.

The gorgeous Elizabethan stone structure, completed in 1906, is actually Fairhaven High School, Henry Huttleston Rogers’ last gift to the town before his death in 1909. I have never been inside–I attended a regional high school–but my sister Sue (the source of all my inside information) tells me the school has marble floors, wood paneling, and carved gargoyles in the auditorium.  The adolescent version of me probably wouldn’t have noticed these grand architectural features anyway.  I would have been too busy hoping one of the other auditorium “creatures” would ask me out after the assembly ended.

I DID pass many afternoons during my teen years as a volunteer at Our Lady’s Haven. 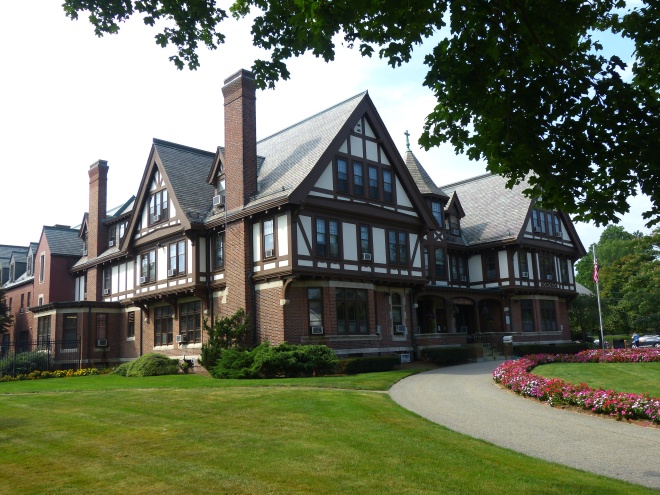 Completed in 1905, the building was originally known as the Tabitha Inn.  Designed to resemble a Shakespearian era Inn, it was described as the grandest hotel outside of New York and Boston.  Samuel Clements, better known as Mark Twain, was one of its frequent guests. It became a home for “the elderly and infirm” after it was purchased by the Catholic Diocese in 1944.

I stopped in to say hello and to take a look around the lobby.  Back in my day, it was run by the Carmelite nuns, but today only one nun remains.  Lovely Sr. Eileen from Ireland is now running the show, making sure Fairhaven’s senior citizens receive tender loving care.

Next to the Tabitha Inn is  a red brick schoolhouse, another gift from Rogers.  The school’s last class graduated this year, and the building is now closed, so all future students will be studying in a more modern building.

From June through September, on Tuesdays and Thursdays, the Fairhaven office of tourism offers 90 minute guided tours, starting at 10 AM  from the town hall — and yes, Rogers donated that too.  Click on this link for more information about the tour and the town.

I wasn’t crass enough to photograph the interior of Our Lady’s Haven, (not everyone enjoys getting their image blasted into cyberspace) but the interior architecture of the town hall is very similar…so you get the idea of how lovely both places are.

My very special childhood place is across the street from the town hall.  The Millicent Library was built in 1890 as a memorial to one of Rogers’ daughter’s, who was 17 when she died.

I don’t think this is a statue of Millicent.  Pretty racy for a small town in the 1900’s, wouldn’t you say?

My summer days were spent in the children’s reading room, where  I discovered that “The Wonderful Wizard of Oz” was only the first in an entire series L Frank Baum wrote about the magical land of Oz.  Those books kept the 9 year old me entertained for an entire summer!

As I was leaving the library, one of the friendly residents (did I mention that Fairhaven people are VERY friendly?) asked whether I had noticed Dante atop the library.  I never had before–but here he is, for your viewing pleasure.

So, who was Henry Huttleston Rogers–and how did he amass such a huge fortune? Rogers got his start in Pennsylvania, where, in 1861, he and a partner started a small business refining oil. By 1885, he had joined with John D Rockefeller, eventually becoming one of the three key men of Standard Oil. Known as “the Brains of Standard Oil Trust” and “Hell Hound Rogers”, he was a captain of industry.

He was also a generous man who befriended Booker T Washington and paid for Helen Keller’s Radcliffe education.

The “giving” tradition continued with Rogers’ granddaughter, (official name when she died: Mary Millicent Abigail Rogers von Salm-Hoogstraeten de Peralta-Ramos Balcom, but she went by Millicent Rogers–and who can blame her?) who founded the Millicent Rogers museum in Taos, New Mexico to house native American art.  The daughter of Rogers’ only son, she was quite a fascinating character–but that’s a subject for another time.

Visitors to Fairhaven should stop at Margaret’s or Elizabeth’s for a great meal. The restaurants are side by side, near the waterfront.  If you are lucky, you might get lovely Kristen for your server, and Kevin may be your chef!