If you are thinking that I’d be tired of Italian hilltop towns by now, you’d be dead wrong.  I love them! I love the walls, the winding streets, the little outdoor cafes, the cobblestones.

The prior post contains photos of the walls of Magliano, way in the distance, as seen from our Fattoria.   Some of the more intrepid bikers actually rode into town during the heat of day, when all wise Italians were eating or snoozin’ and this American was cooling her easy–not moderate–biker body in the pool.  They discovered there was not much to do in medieval Italian towns between 2 PM and 4 PM, other than sweat profusely and drink copious amounts of water.

My Best Biking Buddy Beth, and the rest of us wimps didn’t miss out though, because one night, we rode the van into Magliano for dinner.

If a city has a wall, and said wall can be climbed, you’d best be believin’ I’m on it!  My timing was perfect. I hustled to the top of the wall in time to capture the gorgeous sunset.

While peering through the slit, I found it easy to conjure up a brave knight of yesteryear.  Can’t you just envision him on the wall, looking out into the countryside, ready to defend God, king and castle, while he rosined up his bow (or was that what the fiddler did)?  Or maybe the Maglianese warriors dumped boiling oil on any invaders that attempted to storm the castle.  If so, I sure hope it wasn’t the extra virgin stuff.  Especially not after it had been cold pressed.  (Hey, we learned all about that stuff on our tour of the olive farm).

Also while on the wall, girl scout songs kept running through my head, “the golden sun sinks in the west—something, something– calling girl scouts to rest…  Day is done, gone the sun, from the east, from the west, from the sky.  All is well…”.  And it WAS.

Between the songs and my visions of manly knighthood, it’s a wonder I had the time or the energy to take photos, but I dug deep and managed to fire off a few shots for the folks back home.

I couldn’t decide which sunset photo I liked better, so I’m posting both.  You get to be the judge. 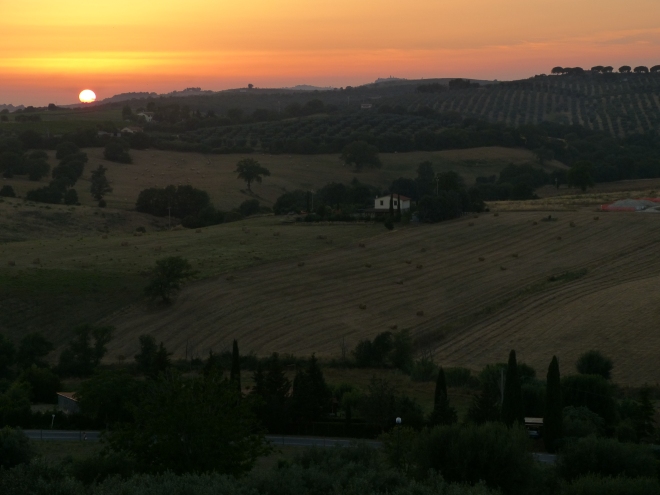 For those of you that have had enough of the sunsets, amber waves of hay, old castle walls, here’s a change of pace.  They DO hang colorful laundry out their windows, now don’t they?

On to the next subject.  Talk about luck… We managed to be in town for the Soccer semi-finals, a very festive and exciting occasion.  Big Screen TVs were strategically located in outdoor bars throughout the town, and it sure felt like the entire population gathered to root for the home team.

Despite being the underdog, Italy trounced Germany.  Unfortunately, a few days later they lost to Spain, but at least for that one glorious night, victory was oh, so sweet.  Especially for sweet Angelo, our guide.  Viva Italia!!

On our last biking day, we rode to Capalbio, another beautiful hilltop town with the requisite wall, castle and church.  But this town had something that the others didn’t…a statue of Beth.

I can’t resist posting one last walled Italian city shot, so here it is.  I’ll spare you the ones of the countryside taken from the wall.  They look a lot like the other countryside photos.  Beloved by me, but most likely boring to others.

And now it is time to end the bike trip saga.  What better way, than to show the lengths to which I will go to get just the right shot. Here’s what I was photographing:

And here’s what I had to do to make sure those wires didn’t appear in the photos.   Thanks, Diane, for capturing my “good” side. See, Mike–I DO have one…

Although the bike trip has ended–Sally, Diane, Karen and I headed off for two more glorious weeks, sharing a villa in Italy, with yet another cast of characters.

6 thoughts on “A tale of two cities –Maglione and Capalbio”