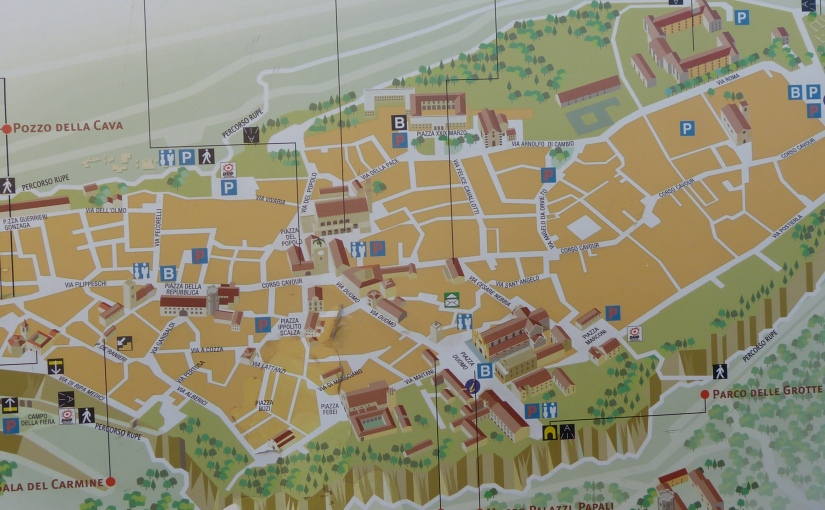 I had never heard of Orvieto prior to my VBT trip.  What a charming little town!  Founded by the Etruscans, it sits atop a pile of volcanic rock.  It is a very walkable town, with enough to see and do to keep us all quite happy and occupied for several days.

The VBT pre-trip package included a guided walking tour.  Manuela explained that Orvieto’s three main squares corresponded to the three important functions: religion, commerce and government.  We are standing in the “commerce” square.  Deserted on a Friday morning, but bustling on Saturday, which is market day.

Sally and I had wandered the streets the day we arrived, but what a difference it made having our guide. (Or maybe being jet lagged had something to do with it.)

The market was a major disappointment, more like a low-end flea market. For example, they sold what my Grandma called “house” dresses. I thought that style died with her, decades ago.

Fortunately the little streets were lined with delightful shops loaded with crafts, ceramics, unique clothing, wine, cheese. You too can own one of these tee shirts if you have 125 Euros you don’t know what to do with! 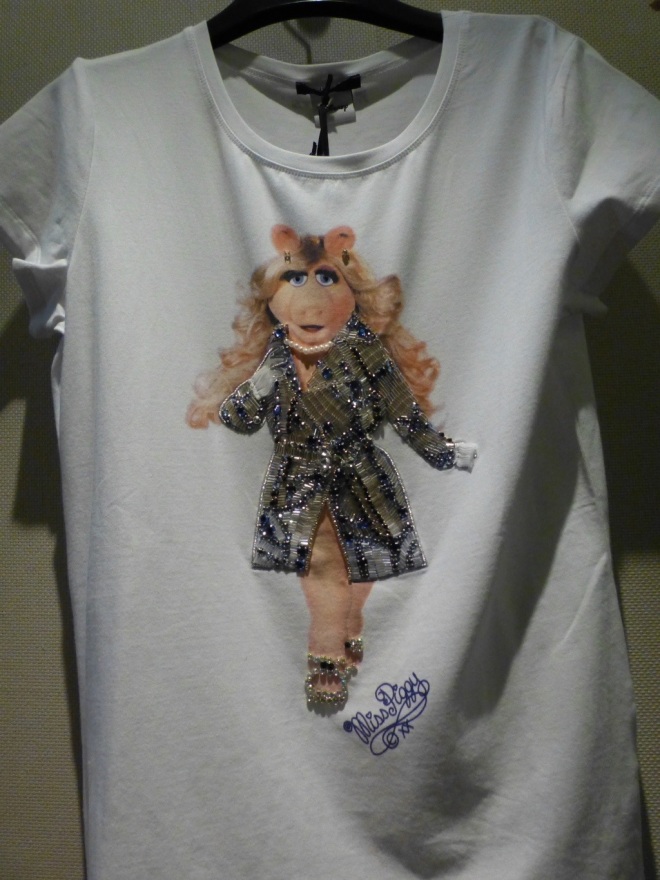 The Government square wasn’t all that interesting, except for the tower that dates back to the 1000’s. 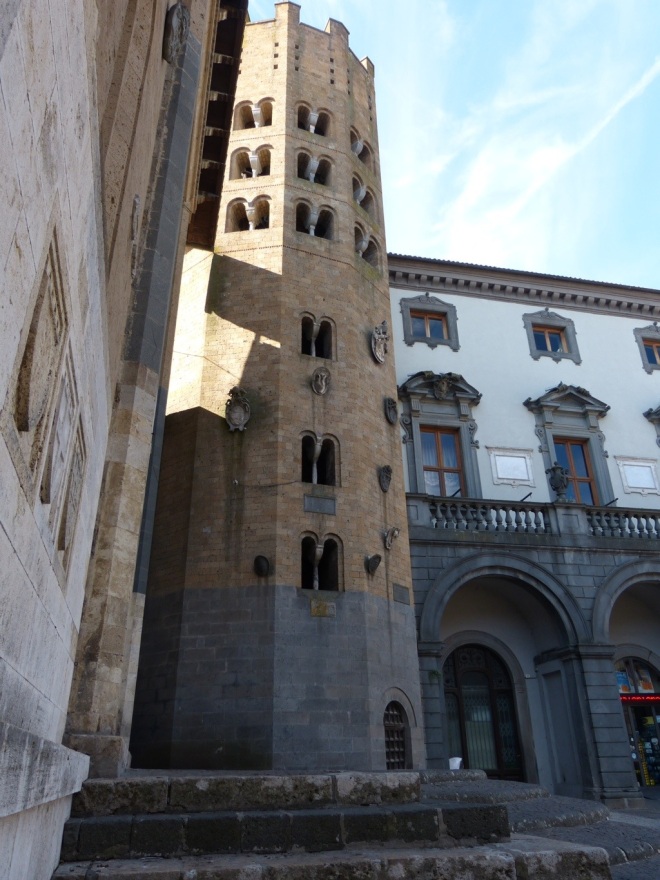 We said goodbye to Manuela after our visit to Orvieto’s main attraction, the Duomo.

It was surprising to see such a grand church in a rather small town. There is quite a story behind it. Any guesses? I’ll tell all in the next post.

By now, you’ve probably seen quite enough of the church, so off we go to the next attraction, Orvieto’s underground tour, the perfect place to hang out during the hottest part of the day. The Uniticket brochure describes Orvieto as the city of a thousand caves. That is likely true, however most of the caves are below people’s houses, and are not open to the public. They make the ideal wine cellar, staying at a uniform temperature.

The tour consisted of a couple of caves that have been linked together by some rather narrow passages. I am more than slightly claustrophobic, so when I saw the tiny, winding staircases carved in the rock, I had to take a deep breath and remind myself that I had passed through a birth canal once, I could do it again.

The caves functioned as bomb shelters during World War II, and in ancient times they were used as pigeon houses (pigeons were considered food in this area), for olive oil pressing and for storage. Because the volcanic rock is relatively soft, the Etruscans were able to dig down to the water table, so the caves were the source of their water. And no, I have no idea who the cute little girl was; she just made the photo more interesting.

The “other” caves, Pozzo Della Cava were discovered in the 1500’s when Pope Clement VII
decided to hang out in Orvieto while Rome was being sacked. He determined the city needed a reliable source of water so it could withstand sieges, so he had the Etruscan well enlarged, and in the process, the workers uncovered burial chambers and artifacts.

More to see, but it will have to wait till the next post.