Ahhh,  Stockholm–there is so much to love about you!  It’s a nice place to visit and I definitely would like to live here, but only in the summer.  Arriving two days before we were scheduled to board the Viking Star was a very good decision indeed.

I haven’t done a numbered list in a while, so don’t you think it is time?  Why not throw out 10 somewhat random reasons to love the city?   There clearly are many, many  more, but hey, we were a bit jet lagged and at our age, it is all about quality time.  (Or was “quality time” what  I told myself our kid was getting so I didn’t feel guilty about being a working mom?  Doesn’t matter –both apply.)

1.  THE INHABITANTS
Everyone speaks English, and they do so willingly and cheerfully, without trying to make you feel stupid for being uni-lingual.

2.  THE MASS TRANSIT SYSTEM
Mass transit is easy to decipher, affordable, and appears to run constantly.  We rarely had to wait more than 5 minutes, frequently less.  Thanks to Rick Steves, we knew we should get the SL card, which was sold at Arlanda Airport.  For about $16 (the Senior rate), we got a card good for 72 hours worth of rides on all modes of transportation: T-Bana, ferries and buses.    When we departed, we still had 4 hours remaining, so we gave our cards (yes they are transferable) to our friends.  What a deal!

3.  GAMLA STAN, THE OLD CITY
The old town is absolutely charming.  During the ’80s the government wanted to demolish the old buildings, replacing them with concrete and steel skyscrapers.  Fortunately, the citizenry protested vigorously, and the idea was abandoned.  Good thing, wouldn’t your say?

We followed part of Rick’s recommended walk, but after about 5 minutes worth of the Changing of the Guard, we’d had enough.  My assessment?  I wish we’d chosen another activity, like visiting the Nobel Museum.  The Changing of the Guard consumed far too much time.  It starts around noon, but you have to get their early enough to be able to see anything, especially if you want a bench in the shade.  Benches were occupied, so we grabbed a column with a pedestal that we climbed upon.  Even so, this was our view.

Less than three blocks from the T-Bana, in Sodermalm, this little boutique hotel is ideally located.  You can sip wine on the restaurant’s balcony while you watch men play bocce in the park across the street.

We booked directly with the hotel, prepaid 6 months in advance, to get an amazing rate.  The room was small, but very comfortable, although I must admit to being mystified by the strategic placement of the bathroom window.  This is ONE throne room we didn’t want to view!

Perhaps those long winter months make the Swedes cherish these long, glorious summer days.  It looked like EVERYONE was outside on this Saturday night,  having a wonderful time.

6.  VASA MUSEUM
Can you imagine spending months of your life creating glorious carvings that will ultimately become bulls-eyes for cannonballs?  What were they thinking???  Fortunately, this ship was as top heavy as a playboy centerfold, and shortly after setting sail, it flipped on its side, then sank to the bottom of the harbor, where it remained for over 300 years.

The museum is absolutely fascinating, especially for those of us that grew up in a former whaling port.  The admission price (It was less than $20), includes a film and a guided tour.  I thought “Vasa” was Swedish for boat, because “Vaca” is the Maori word and “Barco” is the Spanish word.  But no, the ship was named after Gustav Vasa.  He was the son of one of the beheaded victims (at the fountain) who led the revolution against the Danes and became Sweden’s first  king.

We used our SL ticket to catch the ferry to Djurgården, and used it again to ride a tram between the Vasa Museum and Skansen.

7.  SKANSEN
The Swedes call it an open air museum.  WE called it the Swedish version of Plimoth Plantation and Waterloo Village.  We had the perfect day and the perfect setting for strolling outdoors.

8.  CITY HALL
You may never win a Nobel prize, but that doesn’t mean you can’t visit the banquet hall and stand on the staircase where the presentations are made.  The blue hall (which isn’t blue) is where the prize winners receive applause and a free meal. 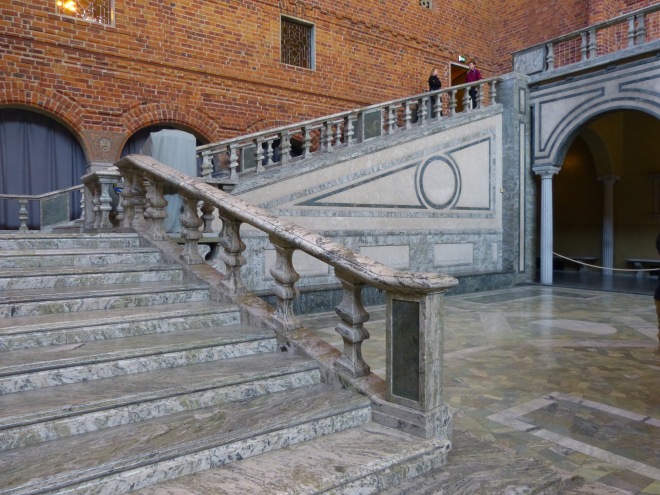 Although I have not visited every city hall, I going to proclaim that this is one of the most (if not THE most) glorious one on this planet.  The location, the mosaics, the architecture–all breathtaking!

And if you have any breath left after touring city hall, you can climb #9.

9. CITY HALL TOWER
Timed tickets ensure that the tower is not overcrowded.  Yes, it IS 365 steps to get to the top, but it is SO worth the climb to for sn aerial view of Gamla Stan.  Wouldn’t you agree? There are nine bells in the tower, and we made sure that we were not standing beneath them when they rang.

10. FOTOGRAFISKA MUSEUM
Such luck! Our last day in port coincided with our friends’ arrival, allowing us just enough time to meet Edie and Ayhan in Gamla Stan for coffee.  Right smack dab on our route to the Viking  Star was the Fotografisca Museum, so of course we HAD to stop.

I had no idea that Bryan Adams was a Renaissance man–a musician AND a very talented photographer.  I’m betting ( And it’s a petty safe bet) that his access to the celebrities was because of HIS fame.  But for me, the most memorable part of the exhibit (and most emotional) were his photos of the British soldiers wounded in Afghanistan and Iraq.

Something tells me this won’t be our last visit to Stockholm!