A photo just doesn’t do the Te Puia bubbling mud pools justice. I was mesmerized, watching them pop up and flatten down. If there were such things as witches’ cauldrons, I imagine they would look exactly like this.

But the real show was the Pohutu Geyser.

Hmmm, that wasn’t all that special…but wait…

It’s getting better…
Our guide, Albert, took this photo of Mike. 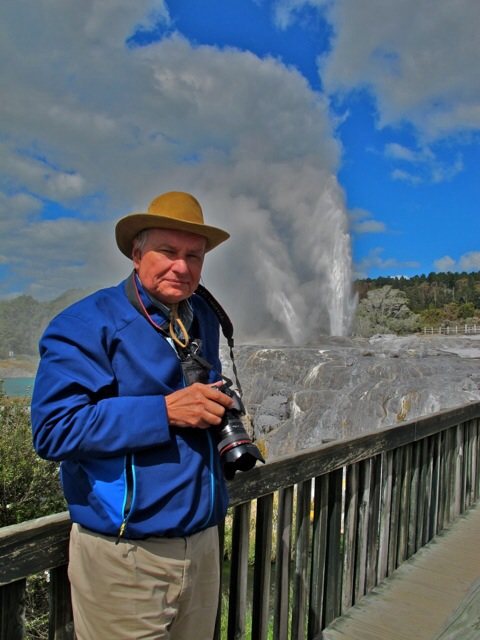 Mike’s quite a distance from the geyser, so it gives you an idea of the size of the water column. But there is more to come.
NOW you’re talking!

Speaking of Albert, here he is with our Maori guide. 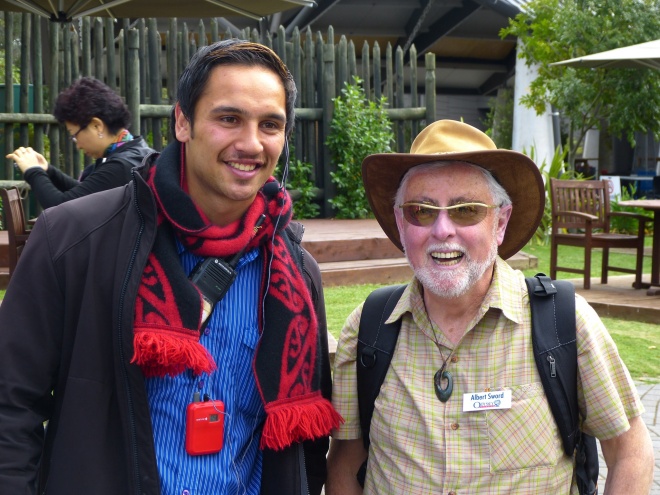 While I was busy photographing Albert, Mike was surrounded by a crowd of Asian women. Just like in Thailand, but this time only one wanted to be photographed with him, so I wasn’t fast enough to capture the scene. Mike was only to happy to explain to me that his new friend told him he was very handsome…
But back to the tour. After viewing the geological wonders, we visited the woodworking school.

This one is my favorite. 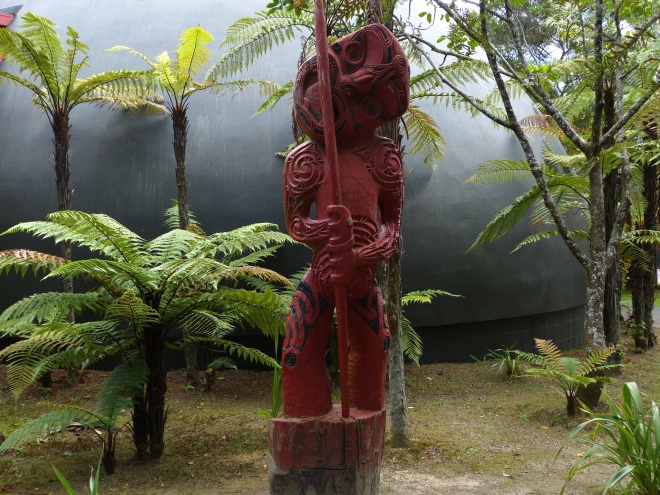 I didn’t think that anything could come close to being as glorious as yesterday’s experience in the Waitomo Caves. I was wrong. The Waimangu Valley Geothermal Site was equally magnificent, but in a very different way. This valley is the only geothermal system on the planet that was created by a volcano–the Tarawera eruption of 1886.

The result was Lake Rotomohana. Our group was divided in two, with half cruising the lake first while the other half hiked, and then we switched.

Our boat was the only one on the lake that morning, and with only 18 passengers, it was easy to get an unobstructed view of all the geothermal phenomenon.   Before the volcano erupted, what is now Patiti Island was part of a small hill. It became a lava plug, cooled, and is now home to cormorants.

The steam vents fascinated me, so I kept snapping away. 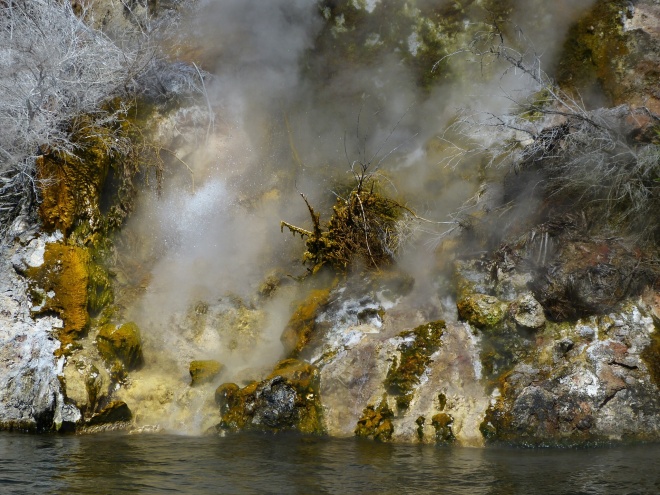 The hike gave us the opportunity to get close to craters and geysers. 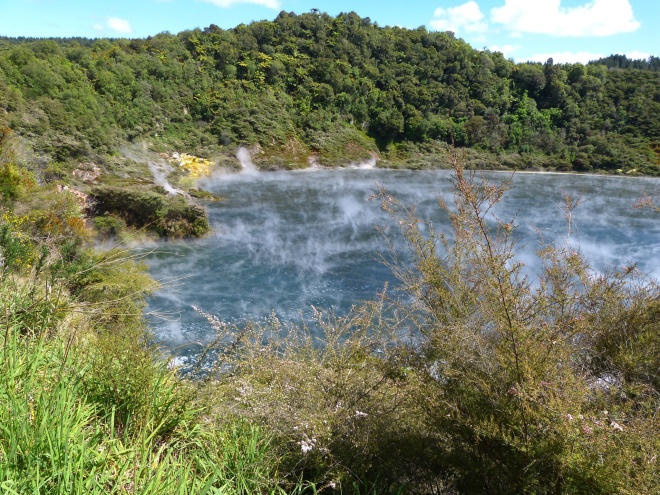 The lake water is acidic. It looks like it is boiling because of the gases (carbon dioxide and hydrogen sulphide) bubbling up to the surface.
Here is our smiling guide Chas, holding a silver fern, one of New Zealand’s symbols. Do you think he usually carries a Winnie the Pooh back pack in front? Something to look for in future installments. 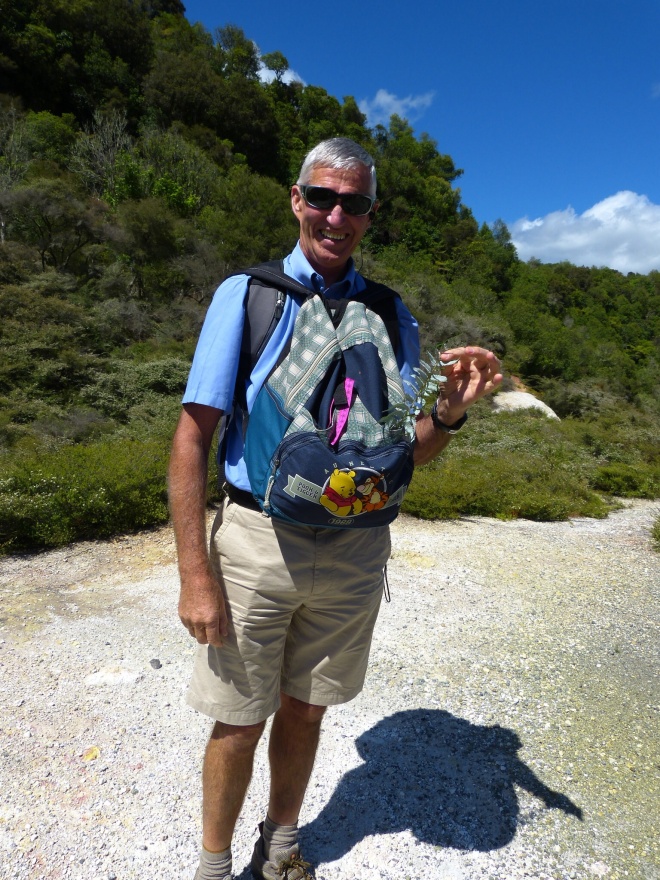 More bubbles, then time to head back for lunch. 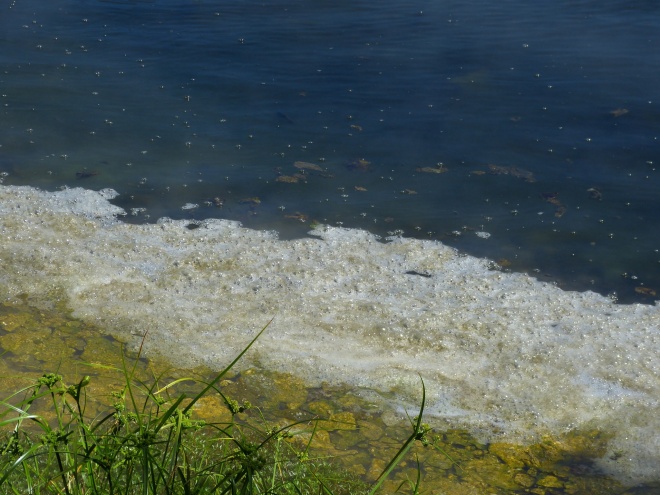 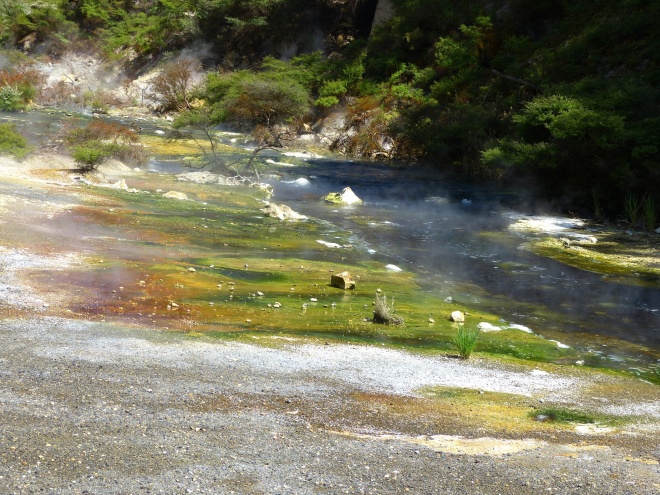 Pretty amazing, right?
Once again, our guides came up with a great lunch venue. The Princess Gate Hotel has it all: an owner that welcomed us with a brief history of the hotel, fantastic food, wonderful ambiance, and a location close to the most beautiful section of Rotorua. 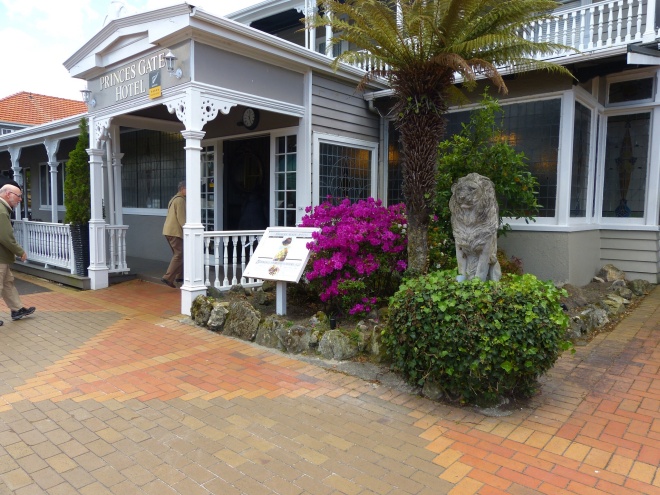 After lunch, we had time to stroll through the gardens, and ogle the beautiful buildings. 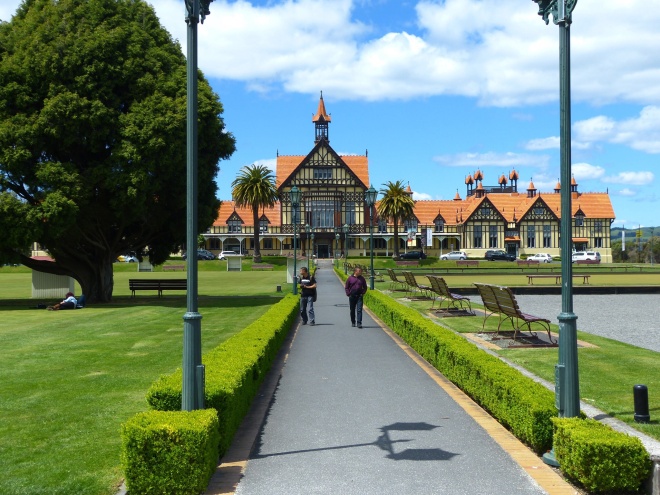 A long drive is a pleasure when you have Albert and Chas on board. Their commentaries are educational AND entertaining. Have I mentioned that the Kiwi sense of humor is quite delightful? 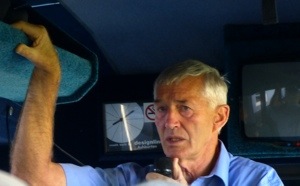 The bus is very comfortable and quite spacious. We were grateful to have our skillful driver Andrea behind the wheel, navigating the winding single lane highways and byways to Rotorua. But first we stopped at Roselands for terrific barbecue lunch. This is definitely NOT a weight loss trip! 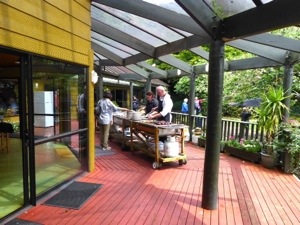 The view from Roselands was typical New Zealand: green rolling hills, with sheep grazing on the hillside.

The rhododendron were in bloom and were spectacular. 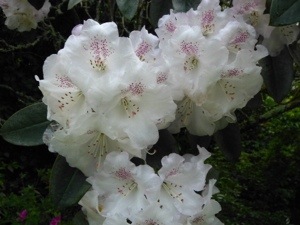 Our next stop was the Waitomo Caves, the home of the awe inspiring glow worms. Here’s what happens. You walk with a guide through caves with interesting stalagmites and stalactites. All very nice, but I had seen similar versions in both the US and Halong Bay. Then we entered a boat, and floated into pitch darkness and complete silence to witness a breathtaking phenomenon. We weren’t allowed to take photos, but postcards are a good alternative. So, this will give you a very rough idea of what it was like. 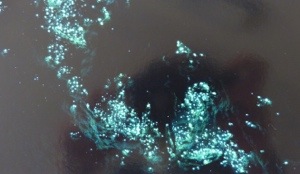 My new friend Mel (and yes, we have bonded already, so whether he likes it or not, he has become a friend for life) wrote this beautiful poem that sums up the experience better than I ever could.
“In the darkened stillness, the glowing pinpoints embrace me, reminding me that, as ever, there is a spirit that guides me.”

It was definitely a peak experience, and one that I will never forget.

Have you ever experienced an inspiring teacher? Been completely enthralled by a lecture? That is what our entire third day was like, being with the amazing Dr. John Walsby. He is truly a Walking Wikipedia — botany, geology, history, architecture, zoology, marine biology–you name it, he can speak at length about it. Although his extensive knowledge was impressive, what was most memorable was his delivery. He talks with his entire body. For example, he didn’t just say “boom” when describing a volcanic eruption — instead, his whole body exploded–with arms and legs flying in all directions. Dr. Walsby is a writer, an artist, a marine biologist, the author of 5 books, weekly contributor to Nature Watch, a newspaper column, and one of the most entertaining and memorable speakers I’ve ever encountered. So, what did we learn?

Although we tend to lump Australia and New Zealand together, that island just to the west of New Zealand is about 1,200 miles away.

New Zealand’s weather is influenced by its location midway between the equator and Antarctica. It gets warm air from Australia and cold air from Antarctica, which makes for plenty of rainfall. The North Island gets many brief showers, averaging about 4 feet per year. The joke is that Auckland gets all four seasons, frequently within the same day. Despite cloudy skies in many of the photos, the weather has been quite lovely!

Some of his more memorable analogies:
The earth is like an egg cooked in a microwave: a solid core surrounded by an ocean of magma with a cracked crust.
Volcanic activity is like tea being brewed on the top of Mount Everest or a bottle of champagne being uncorked, with the crust on top being the cork. Important fact–volcanoes don’t erupt in the same place twice. Once it goes dormant, it is done.
The formation of New Zealand was compared to a scab that formed on your knee (the knee being Australia) that gets “flicked off”.

Our first stop, Lake Pupuke, was created from a volcanic eruption. A mile across and a half a mile deep, it supplies fresh water for the nearby town of Devonport.

Here is Dr. Walsby, demonstrating what happens when a pukeko gets frightened. The pukeko flushes a white tail to warn his compatriots of impending danger. Had I been faster with my camera, I would have caught him flashing the white handkerchief tucked into the back of his pants.

And here is a REAL pukeko.

This beautiful flower is fertilized by birds, rather than insects. It’s “lady parts” are on the outside, rather than the inside of the flower to make it easier for the birds to do their important work. Can you see the long appendage? 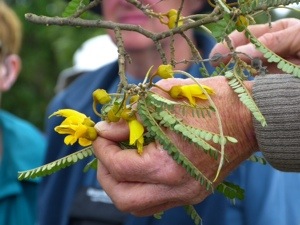 Our next stop is Takapuna beach to see the fossilized trees. When the lava flowed from the volcano, the trees were snapped at the base, with a portion of the trunk remaining. It became encased in hot lava. The flows are clearly visible around what was once a tree trunk. 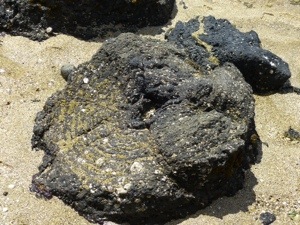 Our final stop was at North Head, a great spot for our group photo.

I’m not pressing my luck–I’m going for the upload! Thank you Queensland Airport!

Mike and I are actually on the final leg of our Road Scholar trip, but our many activities and the wifi limitations resulted in blog lag.

Day Two had a whole lot more going on than just the boat trip, however I had a chance to upload the prior blog while waiting in line at the Queenstown airport, so I went for it. That’s about all that I was able to go for, because our flight was cancelled. Seven of us didn’t make it onto the replacement flight. So, instead, we get a voucher for $12 worth of food, a couple of hours hanging in a very pleasant airport, and a direct flight to Wellington rather than a stop over in Christchurch. Not a bad deal, I would say.

Road Scholar normally has very good guides, but Chas and Albert are in a category all their own. I think I have been spoiled forever, because these guys are beyond fantastic. They are patient, interesting, knowledgeable, funny, and in a very nice way are able to shepherd our group of 34 individual personalities. Now that’s what I call skillful! They have also done a terrific job finding exotic spots for lunch.

We were able to wander through the aptly named Eden Garden, enjoying the flowers, before dining on site.

Here are Adam and Eve, being careful not to eat any apples, but then, New Zealand doesn’t have any snakes to tempt us.

Our final excursion of the day was to Auckland War Memorial Museum. The New Zealanders lost a significant percentage of their population in the two world wars, and they now want nothing to do with armed conflict. Yet another reason to admire the Kiwis

And speaking of kiwis, they are nocturnal creatures, so this is probably the best sighting we are going to get.

One of many beautiful Maori carvings.

I’m going to quickly upload before I run out of MBs!