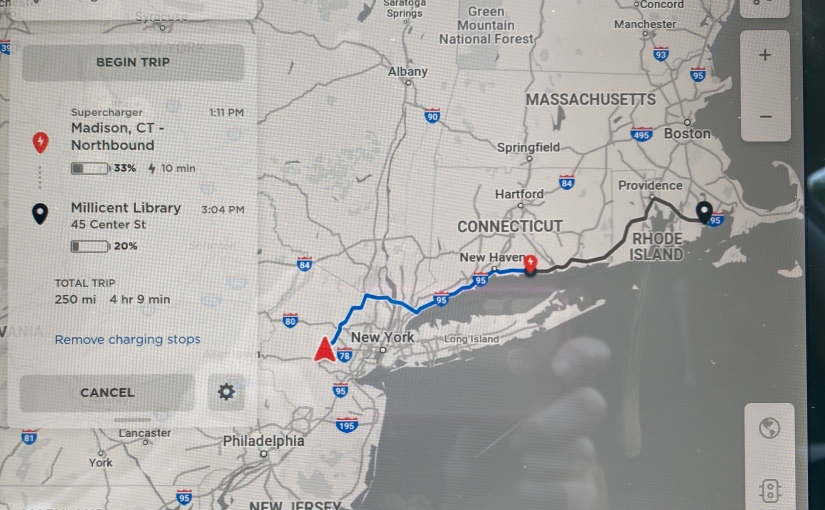 I had no idea when I picked up my “long distance” Tesla Model 3, on March 6, 2020, that it would be 5 months before I found out how far I could drive without stopping to recharge. In the 22 weeks that I have owned my hot wheels, I’ve driven less than 1,500 miles, which averages out to less than 10 miles a day. Our longest excursion, so far, has been our drive to the Delaware River, which is about 70 miles round trip.  Yes, I lead an exciting life.

But all that is about to change. Shortly, my Tesla and I will be embarking on our very first long distance drive. Let me stop you before you conjure up a coast to coast road trip. In the age of covid, I define long distance as any drive that requires recharging somewhere other than our garage. My first trip will be to visit family in Massachusetts. That was the main reason for purchasing the long distance Tesla– my frequent family visits.

Foolishly, I thought a range of 322 miles meant that I could drive the 260 mile trip on one charge.  Nope, the 322 miles is the EPA estimate, and like all the EPA estimates you see stuck on new car windows, it doesn’t consider speed, hills, weather, use of air conditioning, etc.  Knowing my  tendency to press the pedal to the metal, even starting fully charged,  I would expect a 260 mile trip to require a stop.

First let me confess that prior to purchase, I was very concerned about the availability of charging stations. That fear was put to rest when my friend Laura gave me a tutorial from the front seat of her Tesla Model S.  She showed me that all you need to do is type in your destination on your display, and the computer not only maps out the route, but it also tells you where to stop to recharge, how LONG you will need to stop at the station, and how much of a charge will remain once you reach your destination. You want to see what the display looks like?  Check out the header photo of this post, which maps a route from home to the Fairhaven Library, assuming a starting charge of 80%. (WordPress just “improved” its software, so in the off chance that you can’t see the heading, here it is again.)

As of March, 2020, Tesla had 25,000 charging stations in the USA. Only Tesla owners are able to use these stations, which generally are located along major highways, and in places where you would want to stop, with bathrooms, food and/or shopping. But Tesla owners are not restricted to just these superchargers. The Tesla comes equipped with an adapter ( CHAdeMO –no I have NO idea what that means — just think of it as a piece of equipment named Chad) which allows you to connect at OTHER public charging stations that use”Chad” for hooking up.

Because there are a couple of EvGo stations  that are located more conveniently than the Tesla Supercharger, in the area I’ll be visiting, I signed up for an EvGo account. I found the EvGo website VERY user friendly and informative, especially for a non-engineer like me.   After reading its tutorial, I finally understood the three different levels of charging–which was formerly a mystery to me.

EvGo offers two plans: a monthly membership, or a pay as you go option. You also can choose between “super fast” or  “faster than plugging into a standard wall outlet” chargers.  Obviously, the faster one is more expensive.  These numbers are approximate, calculated from the estimates on the EvGo page: $.30 per minute or $18 per hour for 180 miles of charge ($.10 per mile) versus $1.50 per hour for 20 miles of charge (or $.075 per mile).  Because no one in my family has a charging station (or a garage), I expect to be using that EvGo charging station at least once while in Massachusetts and will describe the experience in my usual painstaking detail.

Back to my obsessive compulsiveness.  As my friends and family know, I am a planner, at least when it comes to travel.  Although I can do many things from my phone’s Tesla App, it doesn’t allow me to do any navigation or trip planning.  That can only be done from the car’s display. Maybe some people enjoy sitting in a parked car, but I don’t happen to be one of them.  Fortunately, the Tesla Motors Club website has very helpful and friendly posters who directed me to A Better Route Planner (which can be downloaded to your phone from the app store, or even viewed on your desktop.) Let me tell you, it’s much more fun planning imaginary trips from the comfort of your couch than from the front seat of your car!  At least it is to me.

The information on ABRP (A Better Route Planner)is much the same as what you get from the Tesla Display, except that it also includes public charging stations, and provides estimates of cost and length of time for charging.  You start by inputting the your destination, % of charge (called “SOC” or state of charge), and the application does the rest.  Here’s a screen shot from my phone.

You can include the desired “SOC” for  when you arrive at your destination, and can plot out your stops for your return trip, but you’ve seen enough shots of screens, haven’t you?

For some reason that is clear to the technical members of the family, but not to me, the battery should be kept between 20% and 80% charged.  I don’t need to know why.  I went to Catholic school.  I do as I’m told.  Well, most of the time, or maybe some of the time, and this was one of those times.  Tonight, however, that sucker is getting charged all the way up to 100%, so tomorrow, I’ll be charged up and raring to go.