The Cast of Characters
For those of you who expressed concern about my traveling alone, after Mike and Greg had to cancel, have no fear. I now have five new friends. Here we are at the National Memorial Chorten, which was built to honor Bhutan’s third King, Jigme Dorji Wangchuk .

Jim is a former hotel and restaurant owner from the greater San Diego area. His family used to own Marty’s restaurant and hotel, an establishment frequented by yestereyear’s stars, such as Lucy and Desi, Frank Sinatra, Dean Martin.

Peter and Marie are from the greater Boston area. They retired from the financial industry, and have been traveling the world ever since. Prior to arriving in Delhi, they had taken another OAT tour through the Balkans, then spent a few days in Dubai. Jim, Peter and Marie will be heading home after Nepal.

Marilyn, a retired nurse from San Francisco, is like the little energizer bunny. She walks faster than I do!

Dick, from Seattle, retired from Boeing. He’s the most widely traveled of our group, having been on 27 OAT trips, plus tours with numerous other companies. Marilyn, Dick and I are the only members of the group that will be visiting all three countries. In Nepal, we will be joined by three new travelers.

Although not actually traveling with us, we see the royals EVERYWHERE.  Photos of them are on hotel and restaurant walls, on the sides of buildings, in museums and temples.   This official portrait is of the fourth King, known as the “Royal Fourth” with his four wives ( all sisters), the ten children they produced, (including the “Royal Fifth”) and the first grandchild. Since that photo was taken, the Royal Fifth has married.  He and his stunningly beautiful wife have produced an heir,  the Royal Sixth. 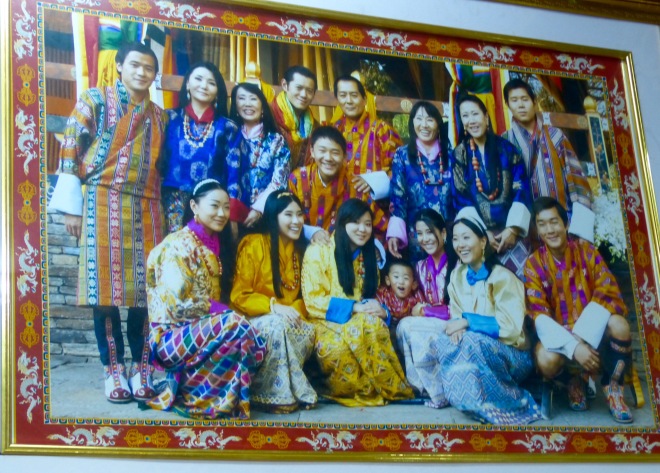 Tashi has identified which member of the royal family is in the motorcade when they go whizzing by.  So far, we have seen one of the four queens, and a royal uncle.

This photo of Tashi was taken at the Memorial Chorten.  He’s  instructing us on the proper way to circumambulate a prayer wheel.  Walking in a clockwise direction, you give each wheel a good spin as you pass by.  If we had been carrying rosaries, we would be using them to keep track of our prayers while we walked.

As with all mountain roads, Bhutan’s have their fair share of hairpin turns.  What they don’t  have are guard rails.  This tour is NOT for the faint of heart or the queasy stomached.  We have come so close to passing vehicles, we could have flossed the other driver’s teeth.  What a relief to have an excellent driver like Gembo getting us to the top of the mountain and back down again.

An unexpected delight was the owner of our hotel in Thimphu.  Her story deserves an entire post, but that will have to wait till I get home, or until YOU stay at the Thimphu Tower.

3 thoughts on “The Cast of Characters”