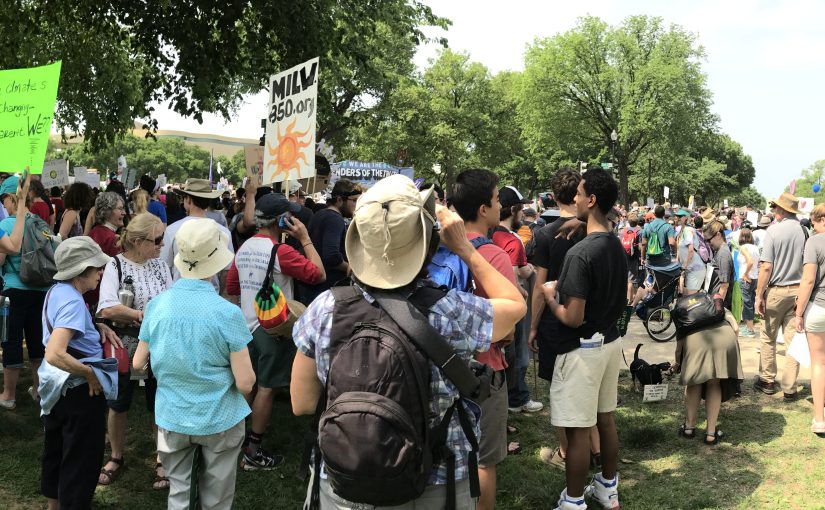 The first time I visited our nation’s capital was in 1970, when I hopped on a plane (another first) to join with hundreds of thousands protesting the Vietnam War.  My college roommate and I had no idea where we would be staying. and as typical college students, we had very little money, but somehow it all worked out.  Like Blanche DuBois, we depended on the kindness of strangers, and we weren’t disappointed.

Fast forward 47 years. Sadly, so many of the issues we THOUGHT were being addressed are still problematic. Though we recite the pledge of allegiance, we still have to work to make  “liberty and justice for ALL”  more than just empty words.  Surprisingly some of the truths that Tom Jefferson thought were “self evident”, today are not.

Yesterday,  Mike and I arose at 4:30 AM to board a bus for D.C. with 50 like minded citizens to participate in the People’s Climate March.  Spirits were high. On the drive down, Stacey, our efficient and amazing leader, reminded us of the rules of engagement established by the March organizers: No violence, verbal or physical toward anyone, be respectful  toward all people and property, look out for each other, pick up after ourselves.  Essentially, reminding us to behave the way we should every day.  Got it. 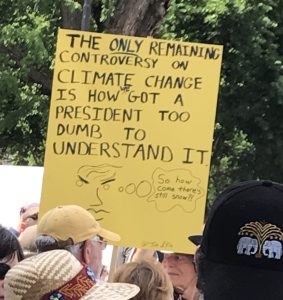 It was not surprising that this year’s march had a bit of a political bent to it, given our current president’s assault on the environment.

Isn’t it hard to believe that it is necessary to demonstrate for clean air, clean water and the preservation of our planet for future generations?  Who could possibly be against that?

Perhaps companies and innovators will view the masses of demonstrators as potential customers for their energy efficient products.  Perhaps our legislators will recognize that they have a constituent or two (or a few thousand) that cares about our beautiful country.  One can only hope.

I marvel that suddenly politicians are glorifying working in a coal mine.  Is it worth defiling our nation’s waterways to allow miners the opportunity to get black lung disease?  Loretta Lynn isn’t singing “Proud to be a coal miner’s grandmother”.

Full disclosure.  My knowledge of mining is limited to watching Loretta Lynn’s movie “Coal Miner’s Daughter”and reading the news, but I believe that miners are like the rest of us, wanting a good job, healthcare and a better life for their children.   I also have a sneaking suspicion that Paul Ryan and Mitch McConnell wouldn’t be thrilled to have THEIR offspring going down into the mines doing those jobs they are hell bent on preserving, but I digress.  Back to the march.

How wonderful to see all ages represented, from babies in strollers to seniors carrying pictures of their grandchildren and great grandchildren.  Despite there being marches throughout the country, many marchers traveled great distances to surround the white house.  We encountered travelers from Minnesota, Ohio and Iowa. Now that’s what I call commitment!

It was difficult to get a sense of the size of the crowd while we were in it.  Fortunately, photographers along the route were capturing images like this one ( grabbed from 350.org’s facebook page).  Despite a late start, and April temperatures that should have made believers out of any climate change deniers, the crowd was focused, disciplined, polite and spirited.   “This is what Democracy looks like” was a popular chant, as we made our way to the White House.

I offer photos from this inspiring day in the hope that you will join us, in whatever capacity you can, as we all continue to protect Pachamama (the name given to the earth, by the indigenous people of the Andes–a goddess indeed).  It isn’t a march, it’s a movement!  Remember– 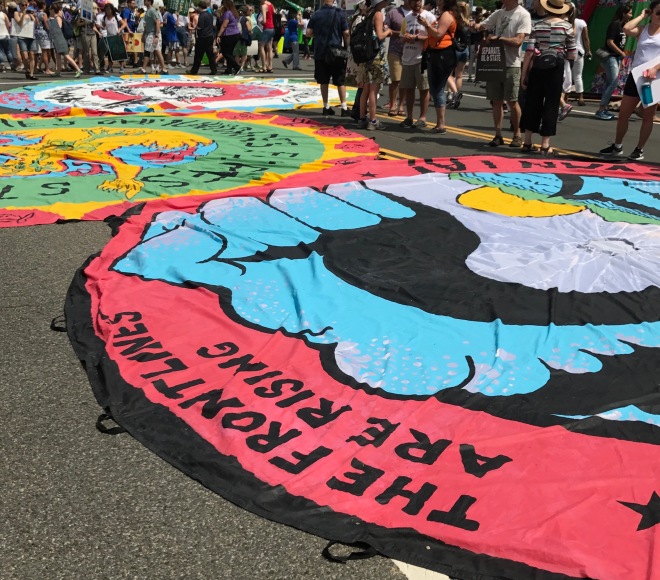