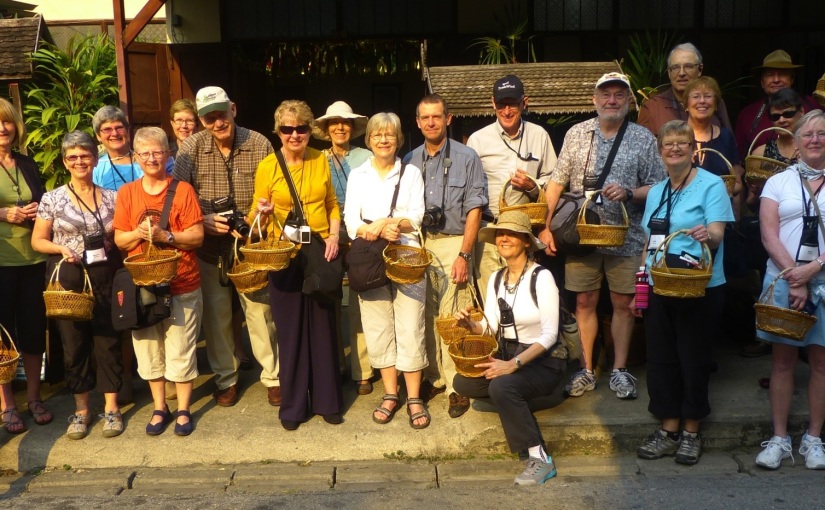 What better way to spend our last morning in Thailand than at a cooking class? 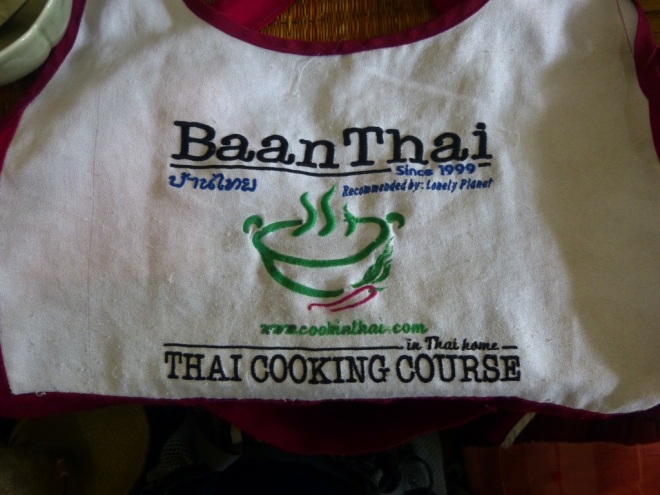 But first, these little piggies went to market, and what a market it was!

The vegetables were so fresh, the bees think they are still growing. 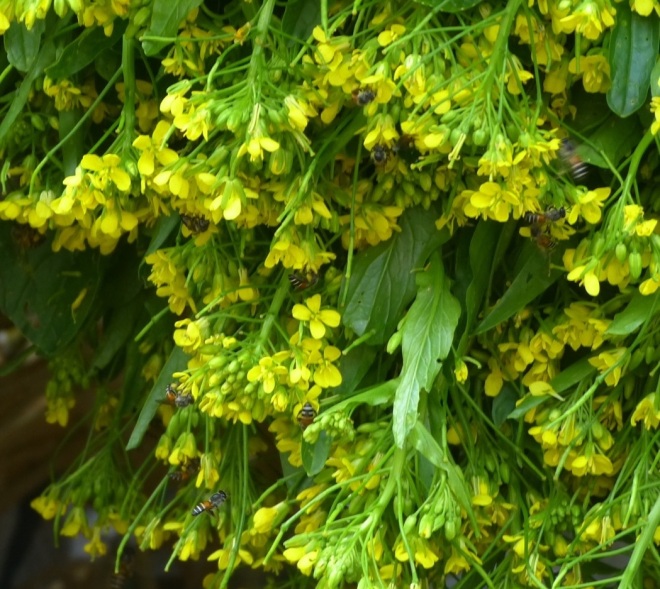 Thai “fast food” – all the necessary vegetables for soup, packaged together.

No wonder Thai food is so amazing–the ingredients are incredibly fresh!
Check out these master chefs. 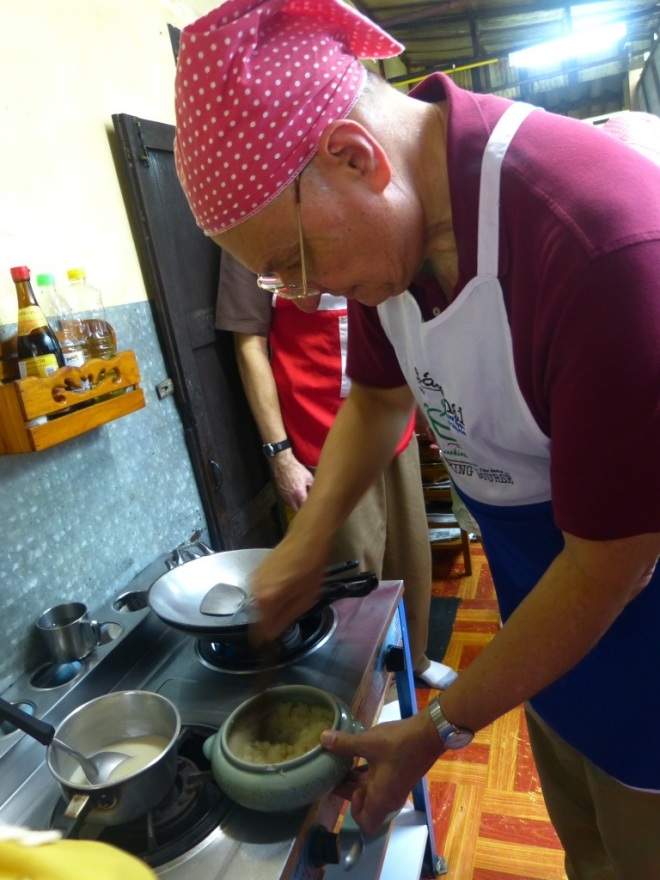 The spring rolls were so delicious, I didn’t stop to photograph them–I think I might have inhaled them…but I DID capture our other glorious creations for your viewing pleasure.
Pad Thai 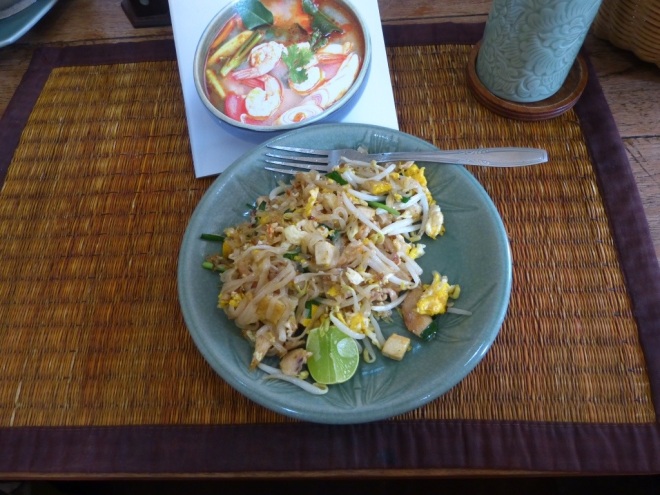 Green curry–we all were coughing as we were stir frying this dish. Not sure what ingredient caused that reaction. 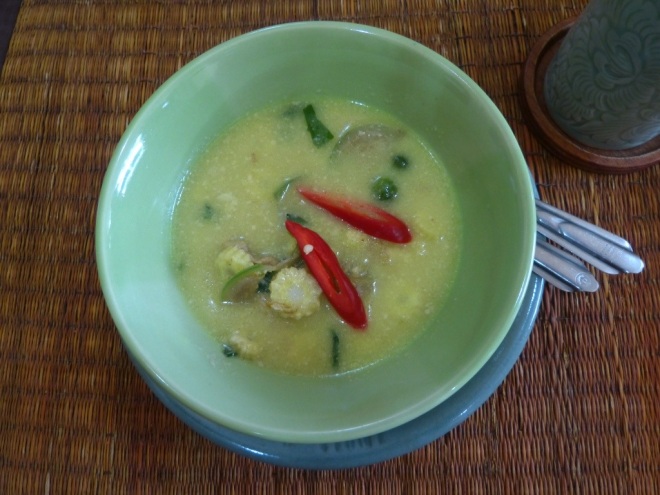 And the grand finale–sticky rice with mango. I have never, ever tasted such scrumptious mangoes. They were perfectly ripened, sweet and juicy.

Good news, folks back home. When I return, I won’t be empty handed. There will be a cookbook in my chubby fist!

After class, we were loaded into vehicles that resembled army trucks. Caroline pointed out this comforting sign. Good to know our driver was trained!

Learning was never this much fun during my school years! Why couldn’t all of my lecturers be like those on Road Scholar trips? Or could it be that I have changed?

Our first two lecturers, Jim Lehman and Tony Zola, were both peace corp volunteers, who stayed in Southeast Asia. Jim was a Buddhist Monk for three months, because he didn’t want to be “unripe”, or as our guide Tippy says, “uncooked rice”. Those are the terms for Thai men that do not spend at least a little time as a monk. If you marry someone who is “uncooked” or “unripe” the Thais believe the marriage will not work out, so it was off to the temple for Jim, so that his Thai wife’s family would approve of the union.

Jim explained that Theravada Buddhists don’t believe in god, however anyone visiting a Wat cant help but notice the Buddhists are deep into Hindu mythology.

In fact, they believe Buddha was the last incarnation of Vishnu. When I asked how Theravada Buddhists reconcile “no god” with their belief in Hindu gods, Jim gave me the answer he got from his Buddhist teacher. “When you have an arrow in your chest, you don’t ask how it got there.” In other words, Buddhism teaches us the way forward. It is not concerned with how we got to where we are. I, on the other hand, would DEFINITELY want to know who shot that damn arrow!

In addition to blending Hinduism with Buddhism, Thais throw animism into the mix. Spirit houses are everywhere, and have varying degrees of grandeur. We saw this one on our daily walk to the SkyTrain from the Loft Hotel. I think my dad might have one just like this in his back yard. (Right, Sue and San?)

Our second lecturer, Tony Zola, talked about the socio-economic-political climate of the countries along the Mekong River, which flows from Tibet to the South China Sea. Sixty million people depend on it for food. They receive 80% of their protein from fish, so the “health” of the river directly impacts the health of the people.

Two of the countries we are visiting are constitutional monarchies (Thailand and Cambodia); Laos and Vietnam are People’s Republics. Per capita income ranges from a high of $8,700 in Thailand to $2,100 to $3,100 in the three other countries. One last demographic fact: half of the population of Southeast Asia is under the age of 25.

Tony didn’t just give us facts and figures; he also told us interesting stories. Thailand’s former Prime Minister received a degree in criminology from the USA. He had a creative way of solving Thailand’s rising drug problem. Somehow, the word got out to rival gangs that each was encroaching on the other’s turf. The resulting murders remain unsolved, which triggered a protest at the United Nations. Again, the Thais had a novel solution. The Thai ambassador’s wife utilized her staff’s cooking abilities to prepare delicious Thai food, which was set up on tables in of the demonstrators. It’s hard to be angry with a stomach full of Thai food. Problem solved…demonstration over. We can learn a lot from the Thais.

Did i mention that my posts are not necessarily in chronological order? Random…that’s the way my brain works. After Tony’s lecture, we headed off to the airport for our flight to Chiang Mai. And what an airport it is! Comfortable lounge open to all ticket holders,. With free wifi, drinks and food. No need to belong to a president’s club here.

At Wat Suan Dok, we had a “monk chat”, a discussion of Buddhism from a monk that was not just passing through, doing time so he could become “ripe”. He was a wonderful speaker, who explained that the goal of Buddhism is to be happy right here and now, to relieve suffering by learning detachment. To a Buddhist, the test of a religion should be whether it helps us to be able to live together peacefully. (I’m thinking there are a whole lot of religions that are scoring big red F’s on that particular test. After showing us how to wrap yourself in an orange robe (or as my cousin Kristy would say “rock his robe”)’ we received a crash course in meditation, and I left with an increased fondness for Buddhism.

Wat Prathap Doi Suthep is located about 40 minutes from Chiang Mai, atop a mountain. This wat is renown because the pagoda contains ashes of the Buddha.

A couple more photos for your viewing pleasure.