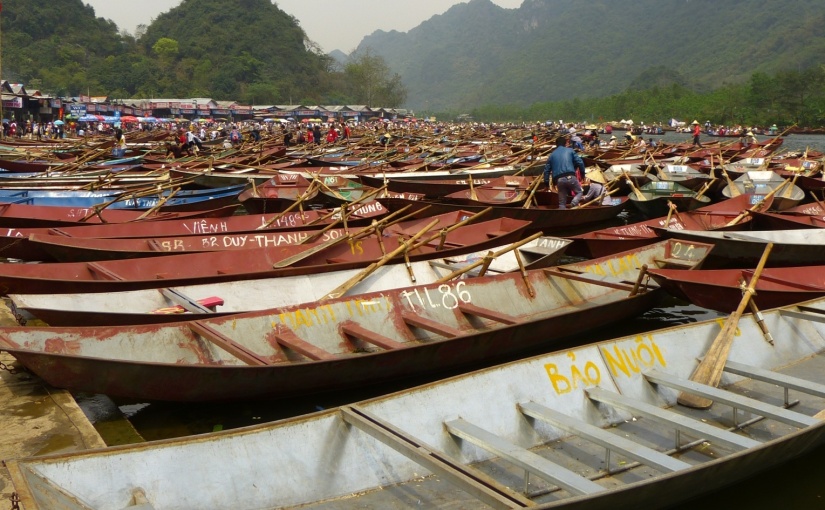 What do we fun loving volunteers do on a weekend in Hanoi? Well, on Saturday we took a cooking class, beginning with a visit to the local market to buy ingredients for our Caramel Pork dish.

On Sunday, Jeannie, Sally and I made a day trip to the Perfume Pagoda, which we subsequently learned is Vietnam’s Mecca. We had thought that a boat ride on the river, into the mountains, would be a respite from the energy and dynamism of Hanoi. And had we visited during the summer, that is exactly what we would have experienced. Instead, we figured that it would have been more peaceful had we stayed in Hanoi, because it sure seemed like everyone in the city decided to visit the Pagoda with us.


After lunch, we headed for the gondola. It didn’t take long for us to realize we were the only non-Asians in the very long line. During the one hour wait, the children used the opportunity to practice their English. Everyone wanted to say “hello” to us. Once again, I was impressed with the warmth and friendliness of the Vietnamese.

A sweet young French girl who was on our tour decided to walk up, and arrived at the top before we did. (I wasn’t kidding about the long lines!) She reported that the way up was very hot and crowded, with gift and food stands lining the road the entire way. We know exactly what she meant. We SAW the rooftops during our gondola ride. So much for fresh mountain air. 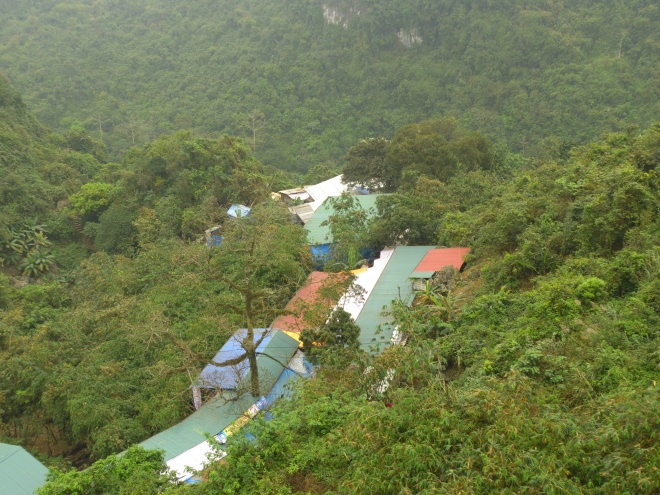 Finally, the blog and my location are in synch! Mike and I returned to Hanoi on March 1. On March 2, I started the solo phase of my Asian Adventure. As I was having dinner with team leader Jim and the other Global Volunteers at the Hanoi Legacy Hotel, Mike was heading to the airport. I was glad that he’d been able to spend time in my “neighborhood”, and meet a couple of the other volunteers.

Judy and Bob, the only married couple in the group, are from Cleveland Ohio. Jeannie is originally from Lancaster, Pa, but now lives in DC. Sally is from Michigan; both Tom and Jim are from Minnesota. All of the volunteers except Tom have been in Southeast Asia for at least three weeks, so we have adjusted to the time change. Jeannie has been here the longest, having left the US in mid January. Like Mike and me, she traveled with Road Scholar, but she took two back-to-back trips with them.

Sunday was orientation for us volunteers. We started by getting to know each other, discussed why we were volunteering, learned about Global Volunteers’ activities in Vietnam and had a brief meeting with the administrator and teachers at Nuguyen Binh Khiem School. 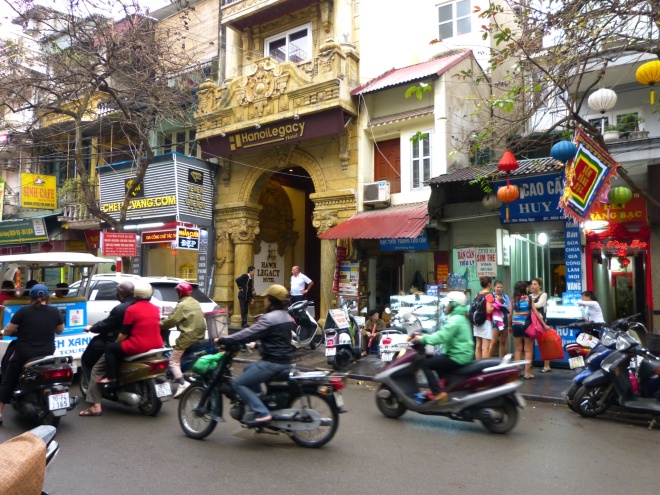 So, to bring light into the rooms in the middle of the building, there is a small opening, the width of a window. The advantage to being in an interior room is you are sheltered from all of the street noise. A very big plus indeed.

Although the building is old, the bathroom is decidedly modern. I don’t usually get excited about a toilet, but this one is AMAZING! It has a bidet built right into it. My new friend Sally and I have declared that one of these will definitely be a part of our lives in the near future. (Are you reading this, Mike?). It even comes with instructions!

The shower is quite spectacular as well. We had something similar in Italy last summer, but this one has enough water pressure so that you could actually USE all the nozzles at the same time. Ahhhh, a great way to start or end your day.

Another great thing about this hotel is its location near Hoan Kiem lake. I love walking around the lake early in the morning; the locals are out dancing, exercising, massaging each other. Because there aren’t a lot of foreigners around in the morning I’ve been invited to participate in the activities. 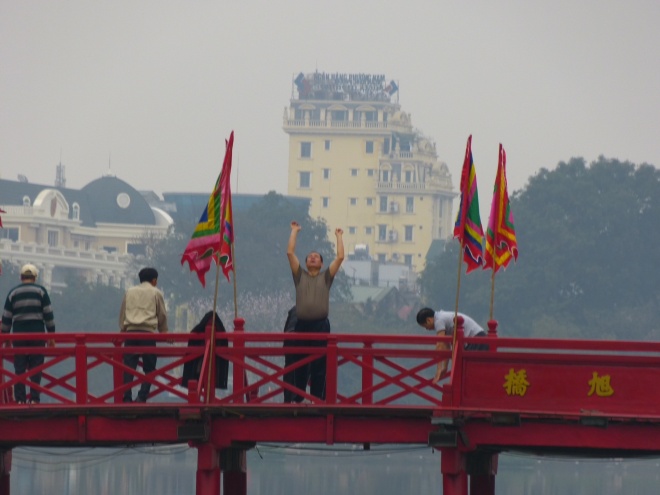 One morning Sally joined me, making us prime candidates to participate in the “chicken dance”. Although I don’t have a photo of that stellar performance, judging from the number of cameras that were whipped out, countless Hanoi locals DO.

I’m thoroughly enjoying being with these friendly, gracious people. The kids are wonderful…curious, bright, fun. The older boys like using my camera, so when some of the children ran over to say hello, I handed the camera to one of the boys, and this was the result.

Only three more days till I head home.

We drove through the mountains from HaiAn to Hue, a very beautiful ride up a narrow, winding road. There was no place to stop to take photos, and the blurry shots from the car immediately were deleted. When we got to the top, the view was spectacular, but too misty to capture in a photo. This mountaintop was at different times a fortress/ bunker for the Vietnamese (fighting the Chinese), the French and the Americans.

You’ll have to look carefully to see the American bunker above all the gift shops and buses.

It made me sad to think of all the American and Vietnamese lives lost or ruined by this senseless war. Amazingly enough, the Vietnamese don’t hold a grudge against us. They are very matter of fact about the war. We have been impressed by how tremendously polite, welcoming and gracious everyone has been to us.
As we descended the mountain, we were treated to a different, but equally fantastic view.

This time I wore a more “wind resistant” skirt!


Two more photos of our drive and then I’ll give your eyes a rest.

Vietnamese fishing boats (for my dad)