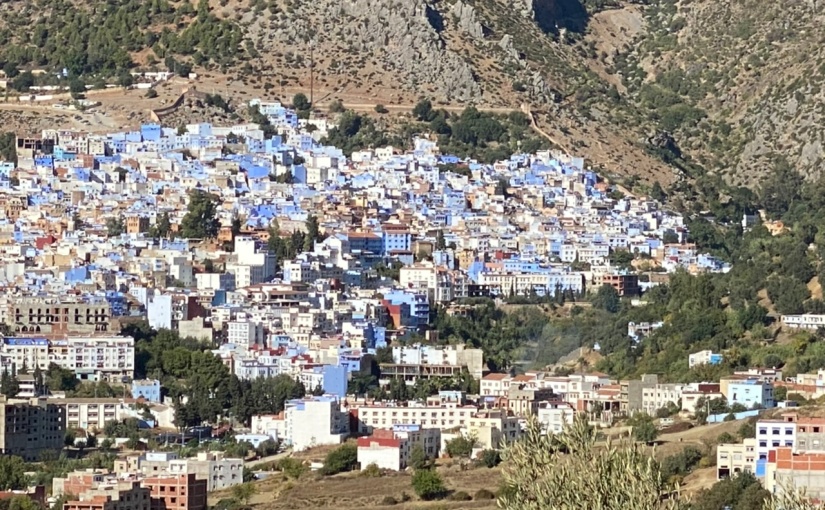 Talk about feeling welcome! The Moroccans were so excited that American tourists were visiting, they sent a camera crew to interview us. So, fellow OAT travelers in Morocco (I know you’re out there), tune in to channel 2 news tonight to see whether we survived the cutting room floor.

It was easy to be enthusiastic about Morocco. The people we have encountered have been so helpful and welcoming and our Riad, Dar Echchaouen, located in the old city, is over the top gorgeous,

And now some history: Chefchaouen was created to be a secure refuge in the Rif Mountains for Muslim’s and Jews that Ferdinand and Isabella expelled from Spain.
First question: Why is Chefchaouen known as the Blue Pearl of Morocco? Take a look for the answer.

Next question—exactly WHY are so many of the buildings blue? Was it because it was easy to extract blue from a particular blue plant or mineral was plentiful during the 1400’s? Was it because the color blue was thought to ward off evil spirits? Or did a former ruler just favor that particular hue?

If this were a multiple choice test, the answer would be “none of the above”. Buildings in Chefchaouen were painted blue in the early 2000’s to make the city attractive to tourists. And it worked! At least until Covid.

To be on the safe side, unless you are flying non-stop to Morocco, get a PCR test. One member of our group was unable to board his Delta flight in Denver, which stopped in Paris, because he hadn’t had a PCR test. Interestingly, another member of the group flew from Denver on an earlier Delta flight and wasn’t asked to show proof (which was fortunate because she also hadn’t been tested). Both were fully vaccinated and showed their cards. The end result was Dave flew out a day later and met up with us late last night in Chefchaouen. Because he had purchased his air from OAT, they took care of his transportation from Casablanca to our riad. The moral of the story: it is better to have a test and not need it, than to have a “Dave adventure”.

And now the weather report for October travelers: it is glorious! Chefchaouen is warm during the day and cool enough for a sweater or light jacket in the morning and at night. Of course, this is only our third day here.