Expect the unexpected and you’ll never be disappointed. That’s my frame of mind whenever I travel. That, and firmly believing that no matter what happens, “it’s all part of the adventure.” Fortunately, all eleven of my fellow travelers share that outlook. So, when Buenos Aires’ central square was completely blocked off, keeping us from visiting all of the major sites on our city tour, we were all perfectly content to go with Plan B.

Mike and I had visited the cathedral when we were In Buenos Aires in 2005, so we were able to see the tomb of San Martin which is located inside. Before he became Pope Francis, this was the former cardinal Bergoglio’s church.

Our guide figured out a way to get us to the lovely London City cafe, where we drank coffee, ate the most delicious croissant and listened to her description of what life was like during the military coup.

During the late ‘70s, 30,000 Argentinians disappeared. Some were activists. Others were artists, poets, actors, students. About 400 were pregnant women. Until recently, no one knew what happened to the babies. A few years ago, the government set up a DNA bank, which resulted in over 100 of these babies (now in their 40’s) being reunited with grandparents and other members of their extended family. Unfortunately, no one knows what became of their parents.

Why was the square blocked off? On March 1, Argentina’s President Macri was giving a speech, as was the mayor of Buenos Aires, and both have offices around the square. This attracted demonstrators, which further disrupted traffic. We were safely inside the cafe, so missed most of the noise and chaos.

When things settled down, we headed for La Boca, formerly the “working class area of town, now a center for artists and (to me, at least) a bit of a tourist trap. 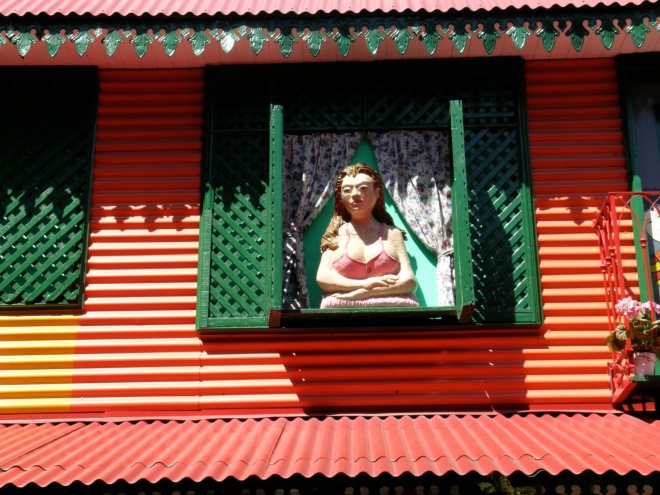 La Boca was significantly more crowded than when we visited in 2005.

Another notable event during our stay in Buenos Aires was our private tango lesson at the hotel. Not only did we learn a beginner version of the tango, but we also were schooled on the RITUAL of the tango: how a man asks a woman to dance, (with his eyes and head) when you are allowed to talk, (never while dancing) in which direction you dance (always counter clockwise, with woman dancing backwards).

Remember my motto: expect the unexpected? It should have been “have cameras ready for the unexpected”. After our lesson, our teacher demonstrated how un hombre asks una Senorita to dance, and to my surprise, I was chosen to demonstrate what we’d learned. My one big chance to dance the tango with a genuine Porteño, and there is no photo or video of it. Damn. I DID have the presence of mind to get a picture of him with his REAL partner.