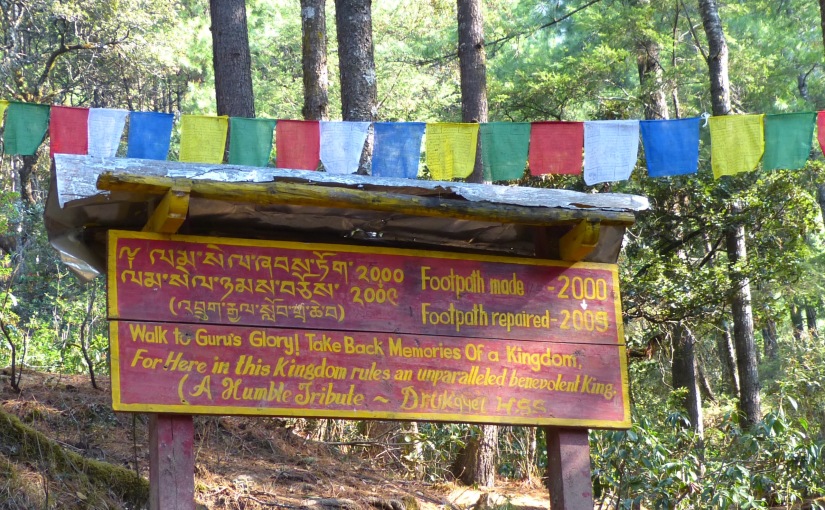 What a great way to end our stay in Bhutan–by hiking to Taktshang Monastery, more popularly known as The Tiger’s Nest.

If you were following Kate’s and William’s recent visit or happened to catch Bill Weir’s CNN show about Bhutan on The Wonder List, this will be a familiar sight.

What  you HAVEN’T seen is THIS shot.

Peter’s watch has a cool feature.  It records the altitude, so these were our starting and high points.

So what’s the back story?  Whenever Tashi, our guide, relates a local legend to us, he starts it off by saying “It is believed”, so I will too.

It is believed that in the eighth century, the king of Bhutan was possessed by a demon. Padmasambhava, the great Indian Guru, who was visiting the king of Tibet at that time, heard about the demon. He turned his consort into a flaming tigress, flew to the mountain on her back, and converted the demon to Buddhism. After his exorcism, the king converted all of his subjects to Buddhism.

His work done, Guru Rimpoche, (Padmasambhava’s more easily pronounced name) meditated in a cave for either three years, or three months, or three years, three months, three weeks, and three days, depending on who is telling the story. He prophesied that a magnificent temple would be built on the site of the cave.

It took until the 17th century for the prophesy to be fulfilled, but it was well worth the wait.  In 1998, the temple complex was destroyed by fire, and was subsequently rebuilt.

The Tiger’s nest is Bhutan’s version of Mecca.  Most Bhutanese try to make a pilgrimage to the Tiger’s nest at least once in a lifetime.  It is believed that you shed your sins along the way.  Let me tell you, you shed SOMETHING as you make that climb.

Although there is an alternate mode of transportation,

we chose the path most taken. It starts out wide, and then gets progressively narrower. 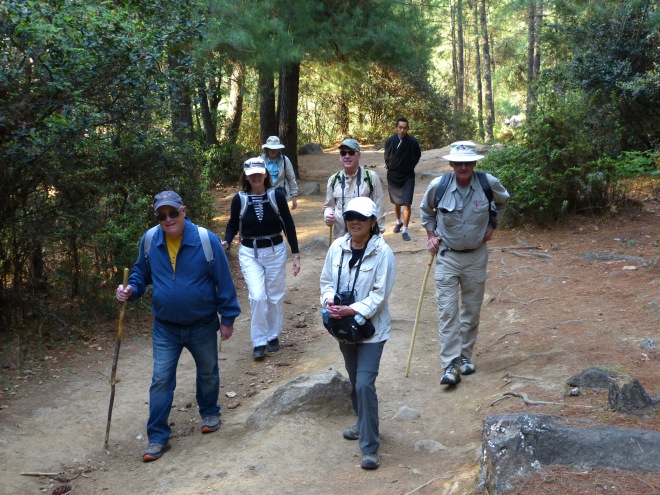 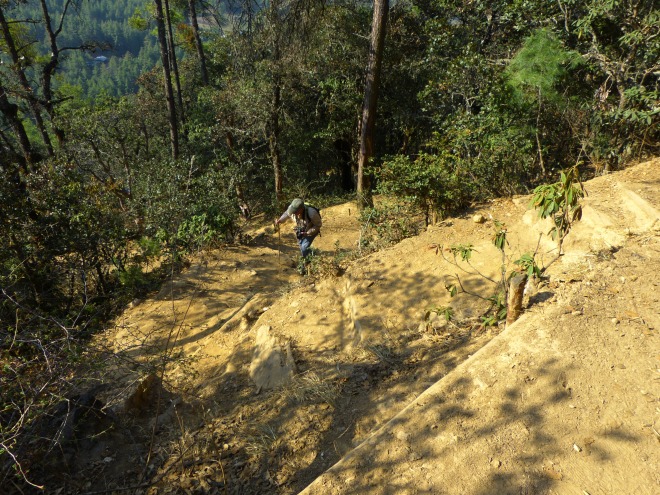 There is a cafe located part way up the mountain, a good resting spot, or the end of the journey for those that find the altitude or the climb too strenuous.

Was it a spiritual experience?  You bet!