Sorry for the delay in posting the answers. Wifi is only available in the reception area these days. That hot spot by the bar? It is now stone cold.

The fun part of this contest, for me at least, is seeing what friends and family choose for their answers. Not surprisingly, Mike has the most points. After 36 years he should know a thing or two about me!

Welcome Jim and Kristy! I’m glad you are participating. And now for the answers.

Every one except Lindy and Mike thought I had “misplaced” my money. That was a good guess, given my past history, but so far, the only thing I misplaced was my footwear. The correct answer was my investment in “end of the day” red wine. It is not that I am a lush; I just never carry much cash when I travel. Instead I use the ATMs, the ATR (Augusta T Rosenthal), and of course, Mike, as my sources for liquid assets.

Mike was the only one that got the second question right. I did indeed go snorkeling. That was a hard one, because three of the choices were very appealing. The only one I would never do is sit by the pool. Ordinarily I would have done zip lining, but we were advised against it for safety reasons. Kayaking without Greg would be a totally different experience. I’d actually have to paddle.

The boat trip to the snorkeling sites was lovely. Here are some photos taken with my iphone.

The last photo is of Mark, our guide.
I’ve only been snorkeling twice, so I was absolutely mesmerized by the sights. My favorite fish was dark blue, covered with luminescent blue spots that looked like sequins. Its tail was nice accent–a brilliant yellow. I was wishing I’d bought one of those cheap disposable underwater cameras!

Kristy and Sandy were the only ones that got the last answer right. Three of us INTENDED to take a bus, but they don’t run on Sunday mornings, except to the local churches. Fortunately, we met Jeffrey (the source of this last bit of information) while walking to the bus stop. We used our considerable powers of persuasion (and cash) to convince him that he should be our tour guide for the day.

Who could resist wheels with “cute face” written across its hood?

Jeffrey dropped us in town, then went to pick up his fiancé, Ashley. Aren’t they a cute couple?

Time for some educational questions. To make it harder, it won't be multiple choice. Or maybe that will make it easier?

Question 4: The cruise ships dock at which St. Lucian city?
Question 5: Which two countries spent150 years fighting over St. Lucia?
Question 6: In what year did St. Lucia become independent?
Question 7: What St. Lucian poet received the Nobel prize for Literature in 1992?
Question 8: St. Lucia makes a unique kind of ketchup. What is unusual about it? (and do you think it might be one of the prizes?)
Question 9. Tomorrow night we will be having dinner in St. Lucia's capital. What is its name? 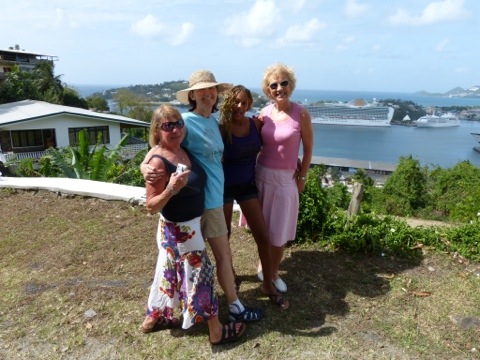