Only one more day in 2011. For me, 2011 was a wonderful year. Our extended family grew through marriage and the arrival of a baby, our son started his MBA at the University of Virginia, we achieved a level of financial independence that allowed me to join Mike in retirement, and we were able to spend time with people that are important to us.

We started the year traveling to Antarctica with Lindblad and National Geographic. We boarded the ship in Ushuaia, Argentina, after a short cruise on a catamaran through the Beagle Channel.

Here is the Antarctica welcoming committee. 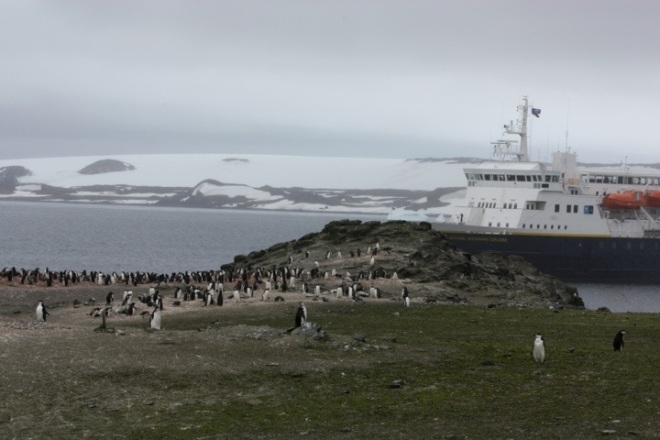 I love traveling.  I love phase one: thinking about places to visit, planning the trip, learning the history and culture, and deluding myself into thinking that I might actually learn a little of the language.

I love phase two: experiencing the actual adventure, which is frequently different from what I had envisioned…not better, not worse, just different.

And I love phase three:  creating the photo book or slide show (or both) of the trip, so that I can relive the experiences over and over, whenever I want. If I’m lucky, in addition to the memories, I end the trip with some new friends

The VBT (Vermont Bike trip) was particularly noteworthy because our entire group was so  very compatible.  And I have been VERY lucky, because that trip was the beginning of several new friendships.

Recently Jim alerted us that Damjan, one of our guides, was in New York City.  Jim’s daughter not only showed Damjan around, but also lent him a bike.  As luck would have it, Diane was up from Boston visiting her daughter, so I made the trip from New Jersey and we all gathered for drinks at the Waldorf=Astoria (No, that is not a typo.  That’s the official name.  Don’t ask me why.) 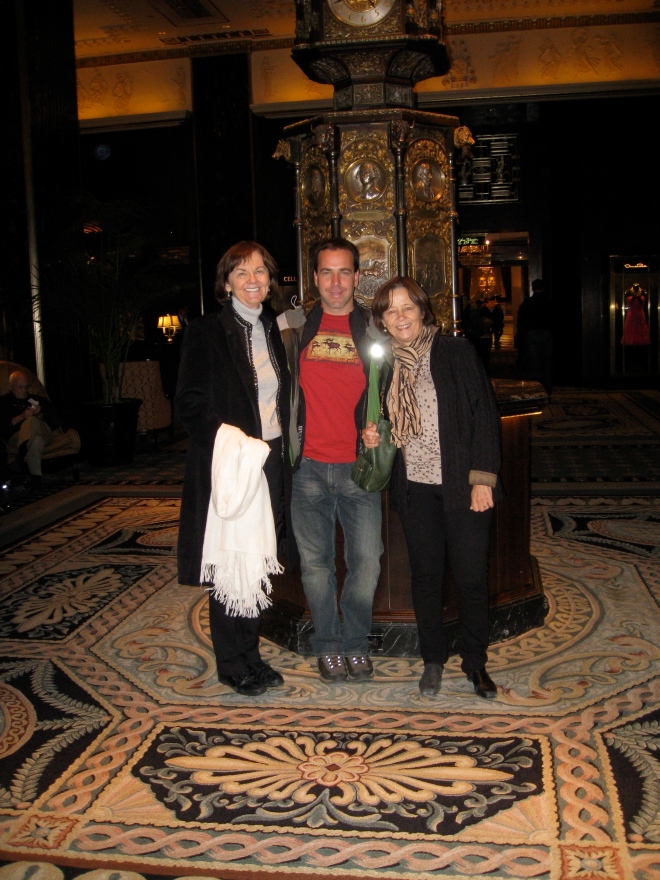 Here we are, standing in front of the very famous clock, in the lobby.  Notice the white shawl I am carrying.  Before the night was over, I managed to spill a full glass of red wine on it, but that’s another story for another time.

The plaque on the base (quoted below) provides almost everything you need to know about the clock:

“The Waldorf Astoria Clock was executed by the Goldsmith Company of London for exhibition at the Chicago World’s Fair in 1893. It was purchased by the Waldorf Astoria and was the focal point outside the Rose Room of the original hotel at Fifth Avenue and 34th Street. This clock weighs approximately two tons and stands nine feet tall. Around the eight sides of the base are likenesses of Cleveland, Harrison, Washington, Grant, Lincoln, Franklin, Jackson and Queen Victoria. Under these are bronze plaques depicting various sports and scenes. Westminster chimes ring on the quarter hour.”

It doesn’t mention what WE observed to be the most important feature.  But don’t worry, we captured it.

After drinks,  we went to Tutuma social club, a restaurant with Peruvian-African jazz.  In keeping with our VBT tradition, I photographed the food, which every bit as good as it looked.

We ended the night with fond farewells to Damjan, who was wrapping up his whirlwind tour of the USA and heading to Paris for a VBT meeting with the other tour guides. 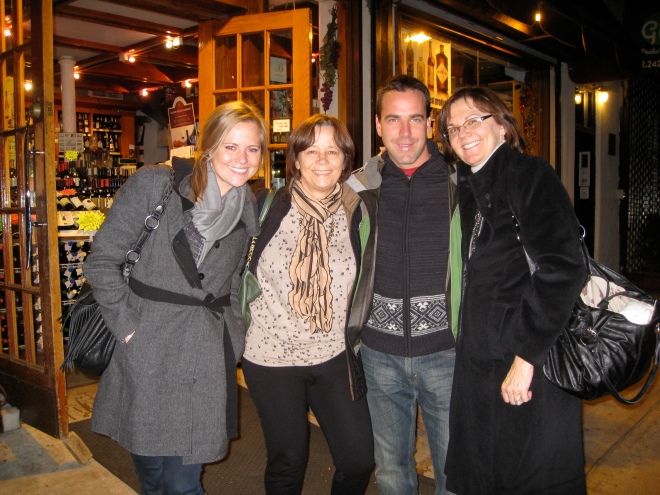 Our next VBT trip will be to Italy, next June.  So far, Diane, Karen, Sally and I have all signed up and Phase One for that trip is currently under way.